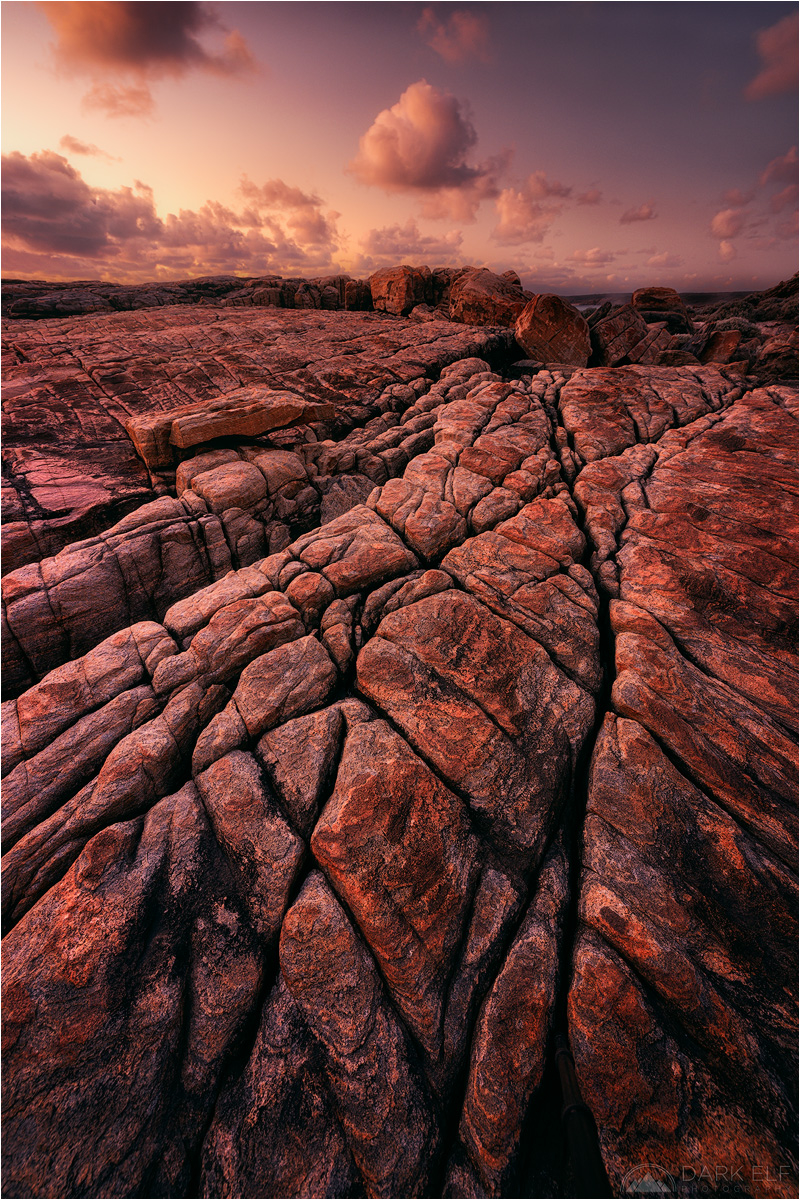 Posted by Darkelf Photography (Perth, Australia) on 16 August 2022 in Landscape & Rural and Portfolio.

A lot of history and passing of many a millennia have been etched into the granite coast around Gracetown in Western Australia. Each line and crease have, no doubt, their own story to tell. They make for a fantastic sight to explore and take in, especially during the golden hours of the day. We have just returned from a week of very variable weather, spent in the south west corner of Australia, exploring new parts of the coast and returning to some old favourites.

This location in a place called Gracetown was one which I wanted to return to because of these magnificent granite rocks. We explored a little further along the coast and discovered some even more remarkable rocks and formations but due to very rough and windy conditions I had to abandon any plans to photograph them this time around. The swell was very large and it was just to dangerous to get to the places which I found most interesting. We did manage to have two reasonable evening outings though and one one of the evenings I was able to get in closer to the water while on the other I concentrated on other compositions.

I took this photo on the second of those evenings. The water action was just not overly exciting and there was no illumination of the clouds so I jumped around the rocks to find other interesting subjects like water pools, rocks formations and textures. I knew that the glow in the sky (which I described in my previous post) would become prominent after sunset and that I should be able to take advantage of its presence and ability to illuminate the rocks and imbue a beautiful reddish hue upon the shore which would enhance the colour of the granite.

When I saw these rocks I immediately thought of vertical framing to allow for the biggest creases to from leading lines from the bottom of the frame upwards. It just felt very natural and almost organic in front of my eyes. The bunch of rocks near the horizon was a perfect destination where the lines stop and I felt that there was just the right amount of sky in the frame. I wanted this photo to be a study of all the tones, textures and detail in the granite surface which were so fascinating to me.

Because it was getting dark by this stage, even with the late glow in the sky, I had to take a couple of exposures to balance the sky against the rocks. In post processing, it was not just a case of simply dumping the darker sky onto the foreground exposure. I had to fine tune the blending to achieve what I feel is a natural result. The transition between the upper part of the foreground and the sky was very important in the process and it took a little bit of manual blending to get it just right.

It certainly pays off to look around and explore every location to find the best of what each place has to offer. On this occasion I was able to find interesting compositions away from my favourite subject that is moving water. Being aware of the light and conditions also helped me to plan a little ahead and to maximise the potential of this beautiful granite coast.

Great framing and beautiful composition! I like it a lot!

This is beautiful, you have a great photographic eye and your post processing skills are really amazing.

@ursulakatariina: Thank you very much :-)

@Jason Kravitz: Many thanks Jason.

Gallery of Favourites by Don Hudson