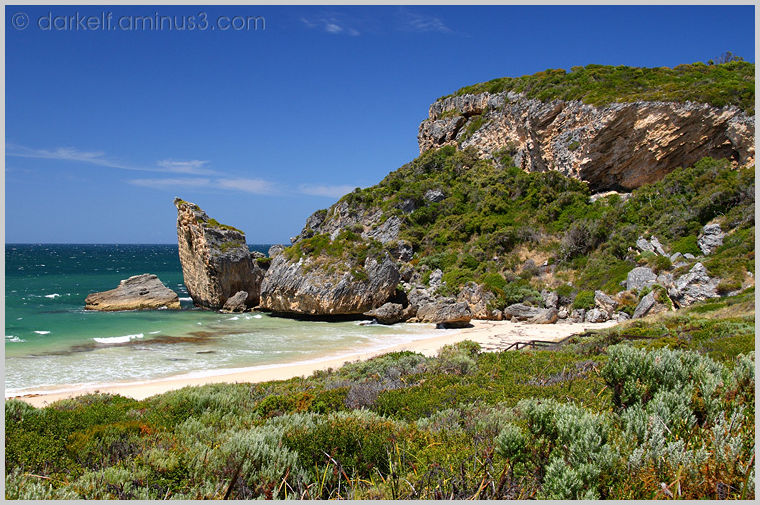 Posted by Darkelf Photography (Perth, Australia) on 29 December 2008 in Landscape & Rural and Portfolio.

today i begin the series of photos taken from the southern coast of Western Australia... previously i posted photos from as far as the most south-western point of Australia - Cape Leeuwin...

now i am moving to the east along the coast... this photo was taken at the place called Windy Harbour, which is a part of the D'entrecasteaux National Park... and i tell you the wind was blowing pretty hard on the day when i was there! it is one of the very few areas in this region that is accessible without the need for 4WD vehicles and the trip is definitely worth it...

it is a suitably sunny and bright shot, as the summer has finally reached Perth today with temperature around 37 degrees Celsius...

The sheer envy of the beauty of this photo is eating at me, so I gave it five stars LOL Oh MY DarkElf it's outstanding!

thank goodness for the wind then!! ;) i remember those ultra hot hot Perth days, lying about in boxer shorts, too hot to move... even getting in the car to go to the beach was an effort!!! finally when the Dr. would begin to blow... ahhh heaven!! a faaabulous spot a marvelous shot -- beautiful indeed!! and the color is striking!!

Excellent composition! Nice nature.
+37...its a bit warmer than the winter in Sweden, -8 outside my window.

What a nice seascape, on this sunny shot…

Would you send an air-ticket from there? :) I envy you...
You are deservedly there, your picture eloquent testimony.

I could live there!!! great color and comp!

Really nice shot. great subject, and you have composed it well

One from Açores, Portugal

It is so beautiful. Gorgeous shot.

Another place to add to my "Must See" list. Beautiful combination of colors and textures in this image!

Oh my, am I envious, we just got -1C today, and a horrible grayness. I think this shot is fantastic, like a distant dream.

Beautiful landscape, DarkElf! A scene of tranquility and beauty (and summertime :))

Gorgeous! Wonderful landscape. Would love to be walking on that beach.

Like a scene from another world right now . . looking forward to this warming series for sure.

Spectacular composition and colors - I can almost feel the warmth - great job!

Great shot!
I wished to be there!

I can't be critic - because this is a perfect place, photographed beautifully.