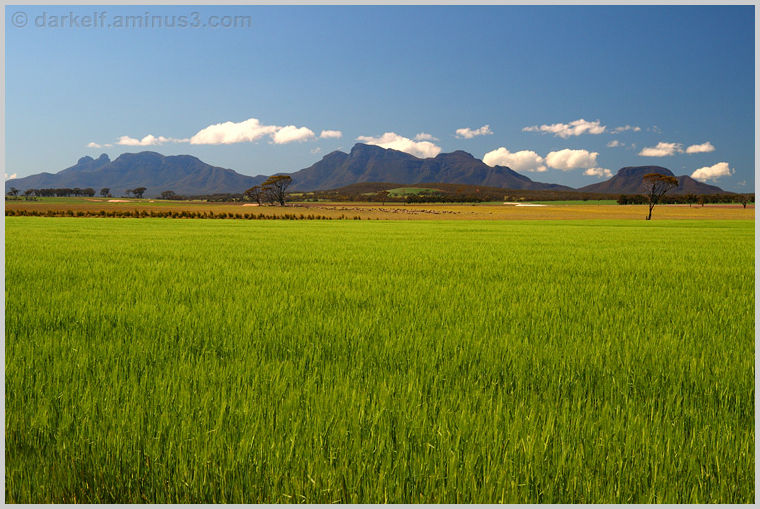 today's photo comes from a mountain range about 70km north of Albany in Western Australia... they are called the Stirling Ranges and while they are not the highest of mountains, they still quite rough and the weather does change here very quickly... the highest peak is Bluff Knoll (1095m) and is visible in the middle of the range on the photo...

i was lucky that just as we were leaving the ranges during our trip in September 2008, the weather cleared completely and presented blue skies and brought out the greens of the local crops, after two or three days of mixed and muggy conditions...

Gorgeous intense green. This is so refreshing.

Thanks for your comment, i just finish a long travel in Australia. I remember the Bluff Knoll, a walk under the storm... I enjoy to see lot of others images of your beautiful BIG country !

great shot!!! worth waiting for the weather to clear!!!

Gorgeous colors, I love those vivid greens and the crispness of the image.

Wow so beautiful. Australia is next on my list of counrties I must visit!

A kinda refreshing simplicity to this . . like it is a demo of what a landscape should look like but seldom does. Even the trees look like tokens.

Great close-up that lead our eye to the real motive of the photo, the mountain!! Congrat. I've seen your exellent portfolio and I would like to congratulate you for it. See you !!

This is just an amazing picture! Fantastic colours in the forground and a sky that looks so nice and blue. Did you use bracketing and blended the images together to get such a perfect shot?

@Ragnar: hello Ragnar! no - no bracketing here and no blending - one shot only! i did use the polarising filter, though, to get better saturation and contrast...

One from Açores, Portugal

This is a magnificent view ! What wonderful colors !

YOW -- i have been missing out!! :) excellent work as always mate!!! looks like we will definitely be meeting face to face this year if you are down -- i have a friend that will be residing in albany until next january shooting an aussie television program!! so of course i will finally have to make it to albany / denmark / esperance after all! yahoo!! marvelous colors here mate -- keep it up and bravo to you!!

Great photo, it really brings back memories....Bluff Knoll, the blowholes....ah...

The vivid green of the grasses in the foreground work well with the distant range of mountains. The few puffy clouds complete this fine image. Well done.

Great photo! I love the green foreground and the overall composition is great! Have a wonderful weekend!

EYES WIDE SHUT from The library of my soul, United Kingdom

Rarely do I use the word, but this is AWESOME! Perfect in every way, Dark Elf

Fantastic green colour in the front, good blue in the rear, perfectly outlined clouds and a great subject for this shot: the mountains! It reminds me to one of those Windows wallpapers. Great picture!

really great .. I can see kilometers of varied lands ..

So rare to see such lush green grasses in Australia. A beautiful image.

Stunning shot, the green grass in the foreground is stunning

Amazingly lovely and green. Beautiful, so clean and fresh

Love the depth of field in this shot. The detail of the grass in the foreground and these colours are amazing.

Excellent shot of the mountains!

This is such a breathtaking picture! It makes me feel so very close to nature and also think of how peaceful life is in places far away from human beings! You should consider yourself very lucky to have been able to have visited here and carried back memories and pictures!

Really like the foreground offsetting the ranges in the background, nicely captured.

Makes me feel so small! Great image showing the vastness and greatness of the Earth.

very good image, sharp from front to back

Beautiful colours. I like the contrast betwen green and blue.

wooooooowww, i love this one on the wall of my living room.

Beautiful landscape that seems to go on forever. The green grass is so vibrant. I love how it stands out. The horizon is perfectly straight..I love that.

Thanks so much for taking the time to leave me a comment and checking out my blog. It means a lot coming from someone like yourself.

Thick green line,orange line then purple line and discrete white line and at last blue line of sky.Nice colors
Maybe with on elemet at front of the frame(for exmple a farmer), You make visitor spending much more time on exploring in your fantastic land(Photo)

@Mr.Shooter: hello! thanks for visiting and leaving a comment - I agree with you - it would have been nice to have a point of interest in the foreground but on that day and at that place there was nothing of note visible as far as the green fields went... may be next time ;-)

WoW!!! what a beauty yaar!!!
It's so captivating. Good framing.

Wow! -shot
I like the arrangement a lot, but could imagine it with something in the front.
(I see, Mr.Shooter has written about the same )

Wow! What a view!!! Simply beautiful

this is what i like abt photography...you can visit a place without going there...your pics does that...capturing Australia....this one is a great image with lush green

That is my favorite nuance of Green ! Gorgeous . Panorama is so attractive . Love these beautiful trees, not to mention a great sky and mountains ! Simply - stunner !!!

Yeah, maybe you can superimpose yourself riding a tractor in the foreground. ;)

This is bloody brilliant mate. The entire composition is top notch. I'd hang it on my wall any day. Raise your bat to acknowledge the standing ovation. Well played, sir.