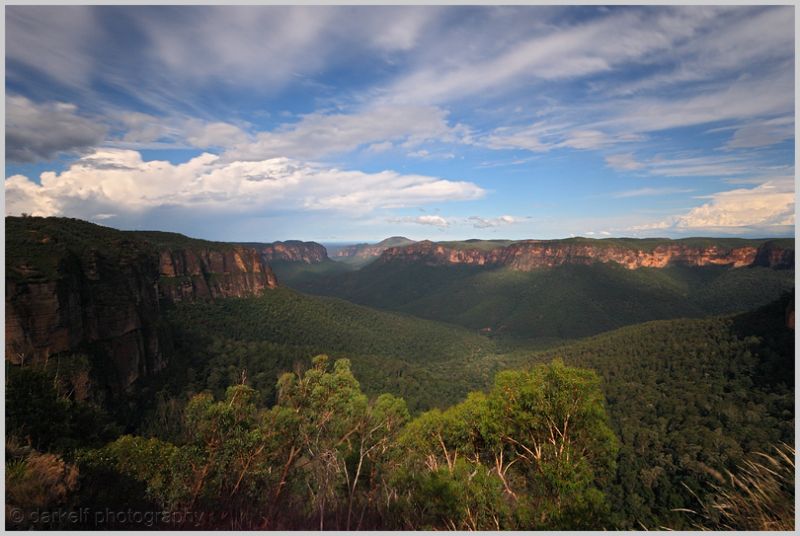 this photo was taken from the Govetts Leap in Blue Mountains, west of Sydney... the valley that you can see is called the Grose Valley and it is one of the many spectacular sights to see in this region...

i did a little bit of experimentation with this shot as i put on a heavy neutral density filter on my lens to see if i can capture a little bit of cloud movement and give this scene a somewhat more mysterious look and feel...

it is not easy to work with such a filter because it is so dark that you cannot see anything through the viewfinder... i had to focus before putting the filter on and then experiment with the shutter speed to get the best exposure... what also made things tricky, was the fact that there were many clouds around and certain areas would be illuminated, while others hidden in the shade... in the end i think i struck a reasonably balanced light here...

and now back to the nature...Love both!

Beautiful big country shot. Is it a national park?

@grouser: Yes it is - i think it is also marked as a world heritage area...

First of all thank you for your coment on my site. I like this image a lot and can appreciate what you went through to get it. Using filters is almost a lost art. I like the depth you have achived also. You have a great portfolio and i like your use of colors.

An incredible view and I like the movement you captured in the clouds! This landscape is similar to some parts of the desert southwest.

I think that the result is pretty good, good work.
This is a spectacular place.

Great shot. I've been to the Blue Mountains, and this picture is exactly how I remember it. Thanks for sharing.

Stunning shot, i think you have done a good job with this one,nice one !
Regards Jim

Beautiful scene. Just one more reason for me to visit Australia--too bad it's so far away.

shoti from somewhere in, China

I love looking at landscapes like this one. wonderful!

Wow very nice view ! I must go to Australia.

Well this brings back some happy memories! I remember standing there taking pictures in 1995 on my way to visit family in Mudgee... I must dig those negs out and scan them :-) It was sunny and hot on the way out in March and snowing when I came back through in April.

The use of the ND grad has really brought the sky out. I love the depth to this image, it's hard to capture such a wide expanse without the effect being lost.

Oh! I think this worked out extremely well! The movement in the clouds gives it a fantastic feeling of depth!

Stunning shot and great use of the ND filter! The movement in the sky is wonderful. I have a few graduated ND filters in my arsenal, but I need to pick up a few regular ND filters to play with.