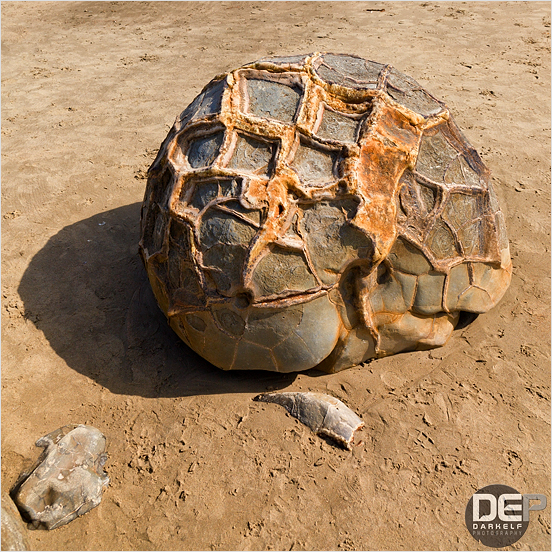 one piece at a time

a closer look at one of the lonely Moerakis that has experienced the decay and passage of time more than some of the others...

Just looking back over the past few pictures, I'm fascinated by the roundness of these boulders. Do you think they were products of a volcanic eruption at all?

@Curly: i am not sure - i know that they were exposed by the erosion caused by the sea...

Amazing shape and structure, looks as if it were sculpted.

In ref to Curly - they are not formed by volcanoes nor are they fossils - They are concretions and formed "naturally" and a very common geologic phenomenon in all types of sedimentary rock. Concretions form as minerals within a rock segregate and begin to precipitate within cracks and cavities, or as a sediment builds up in successive layers around a nucleus such as a shell or pebble.

Similar rock formations can be found in numerous sites around the world including a couple lesser known places in NZ. (Koutu Boulders on the North Island and the Katiki Boulders a few miles south of the Moeraki boulders)

@Jules: thanks for the info Jules :-)

Fascinating piece of geology and quite an other worldly look - like a relic from the red planet!

Very cool Denny - thought I was looking at a turtle! Very cool place.

That may be a rock but. it looks like an alien super brain to me. Maybe all the boulders are secretly communicating. ;-)

It looks like crust of turtle. Nice light and colours.

Wow, how cool is that, great shot, fantastic detail

What an incredible find that you've captured with great textures!

yup..fantastic detail... actually what is that?

I love things like this, so fascinating....When I use my imagination, it could look like so many things!

very interesting, that boulder could be a photographic study all on its own...

and thanks jules for your information.