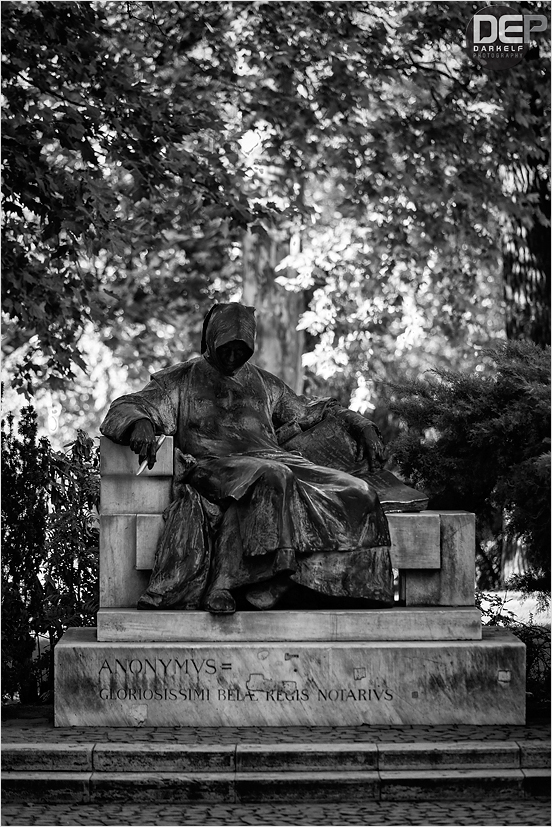 this is the statue of Bele Regis Notarius in the City Park in Budapest... it is right next to the Vajdahunyad Castle and near the Hero's Square on the Pest side of the Danube...

"Bele Regis Notarius ("notary of Béla the King"), most often referred to as Anonymus (Latin for "unnamed"; fl. late 12th century – early 13th century) was the notary and chronicler of a Hungarian King, probably Béla III. Little is known about him, but his latinized name began with P, as he referred to himself as "P. dictus magister". Some scholars suggest that he was Péter, the bishop of Győr.

Anonymus is most famous for his work Gesta Hungarorum ("The Deeds of the Hungarians"), written in Latin around 1200. This work provides the most detailed history of the arrival of the Hungarians to the Carpathian Basin (Hungarian: honfoglalás), although historians do not accept his work as authentic. Most of his attempts to explain the origin of several Hungarian place names are unsupported by modern etymology. The names of the seven chieftains of the Hungarians are known from his writings."

beautiful light shining through in this b&w - great composition

Works well in black and white.

This works so well in mono, niceone

Excellent tones in this capture with a beautiful bokeh effect for the background!!!

The treatment gives the sculpture a wonderfully convincing life

Wow. I went most of those places, but somehow missed this cool statue.

A stunning B&W image of this statue.