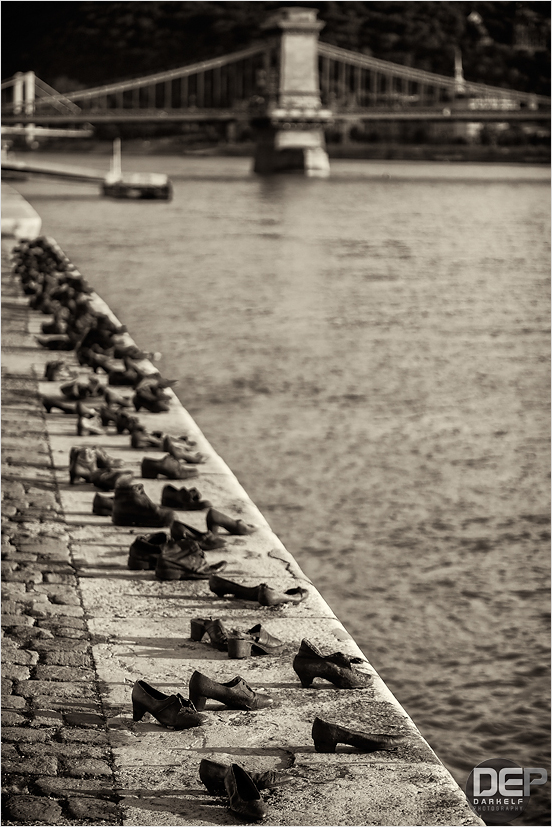 Shoes on the Danube Promenade

Posted by Darkelf Photography (Perth, Australia) on 30 April 2013 in Miscellaneous.

it is a memorial on the bank of the Danube River and it honours the Jews who were killed by fascist Arrow Cross militiamen in the city during World War II... the Jews were ordered to remove their shoes, and were shot at the edge of the water so that their bodies fell into the river and were carried away... their shoes were left behind on the bank and this is what this memorial represents...

We should never forget these things. Thank you

A very disturbing piece of our history - a poignant reminder so we never forget the awful atrocities we are capable off.

This is just great—what a poignant image. The shallow DOF gives the illusion that they recede into infinity.

This is a memorial that shakes you up! Thanks for sharing...excellent photo.

Excellent composition and control of depth. That these horrific events took place so recently in the heart of Europe are a grim reminder of how shallow civilization is.

Such an unusual find at first, but very powerful when reading the story behind it. Great PoV which has a nice leading line to the beautiful bridge in the background!

Very moving indeed. I love the perspective on your photo and thank you for the story behind the photo. It was really interesting to read.

A sad reminder of tragic and brutal times, a moving reminder, well done...

Crikey, what a great memorial. Poignant, painful, and presses the point perfectly.

The shallow DOF is perfect here - superbly done
A very moving image. Thank you for the interesting information.
Lest we forget.

Oh....what sade, but a beautiful picture
Excellent presented in black-white

what a sad place, what an intriguing and well done picture ...

What a powerful image. I had not heard of this particular story before.