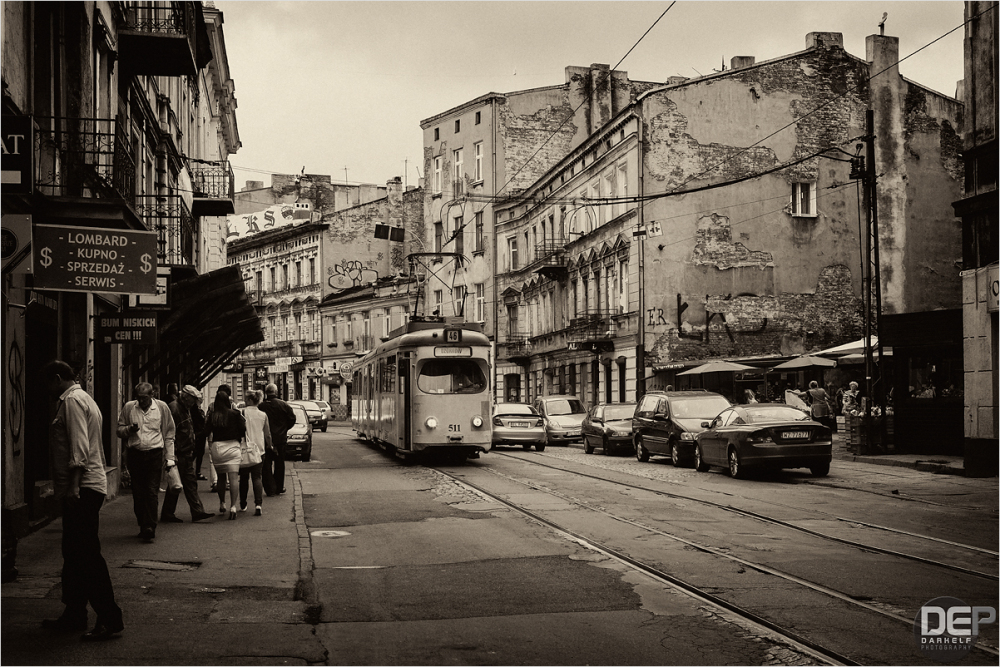 step back in time

Posted by Darkelf Photography (Perth, Australia) on 23 May 2013 in Documentary & Street and Portfolio.

the city of Łódź in Poland has some very climatic streets, where the time seems to have been almost suspended since the end of Second World War... Legionow Street is one such street - if i took the modern cars and neon signs away, it could easily still be 1950's, especially with the old German tram adding to this mood...

it is a city in a bit of depression because when the textile industry fell through in the early 1990's, a lot of people left (and with them money) and a lot of buildings were left to slowly decay into what you can see in this image...

Great photo, i like the mood of old time! the tram is very old but charming.

it does look as if was taken in the 50s (except for the modern cars). very nice!

wonderfully crafted - so much detail and activity in this scene

very authentic ... some might call it depressing, i say it has potential !!!

@franz: it is a good sentiment :-) there are a lot of new projects to revitalise the city... i would say that to city street photographers it is a bit of a dream if they are looking for something a little "different"... i did not spend there enough time last year but next time i go, i intend to explore it in more detail...

Definitely a cityscape that seems to be caught back in time. Your processing in B&W helps add the vintage feel. Great capture!!

A very dramatic and "telling" image, DarkElf!! Great job about a sad story!

It really is like looking back in time, very good documentary shot

love this street scene, the sepia was perfect. You captured a timeless scene.

Yes, we have a lot of those streets in Poland yet. Superb atmosphere.

We do. The perfect treatment

we guess that the riches before, are no longer,
with these facades damaged, the sepia brings into focus this picture, bravo

Excellent vintage feel to this image.

I like it. It does look like another era, such as when I was growing up in Lima, Peru.