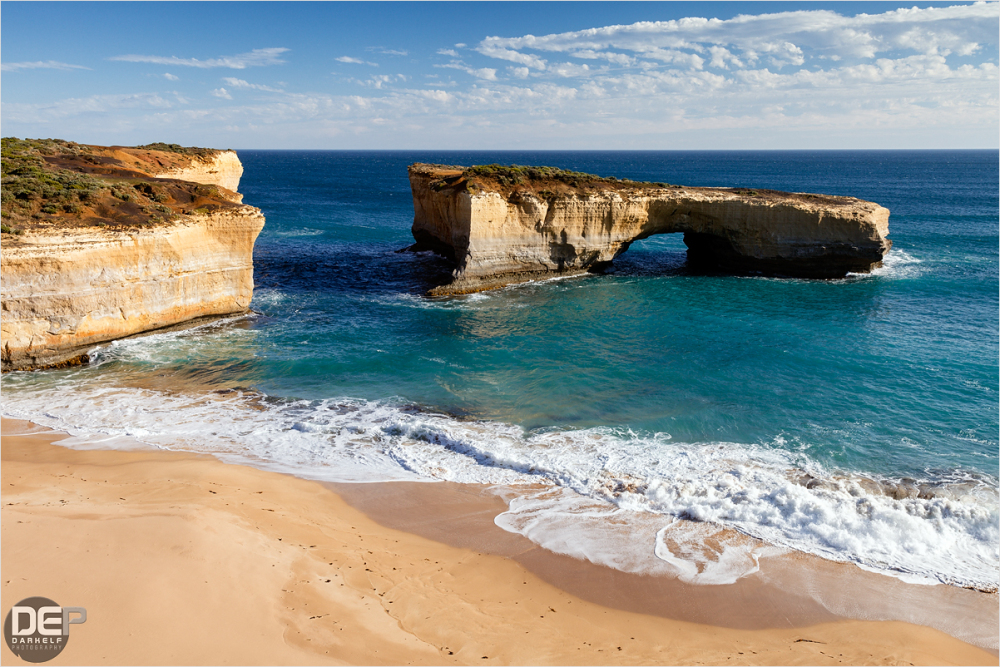 a little further west from the Twelve Apostles (i will come back to them) and the Grotto is a formation called the London Arch... this is a natural arch and until 1990 it was a part of a complete double-span natural bridge...

the arch closer to the shore, where there is now a gap, collapsed unexpectedly in 1990... before the the collapse, the entire formation was known as London Bridge because of its similarity to its namesake...

A strong but lovely light and vivid saturated colours for this famous arch. That blue reminds me of old Kodachrome. A place I'd like to visit.

Gorgeous! Have a nice day.

brings back memories of my drive along the Great Ocean road - fantastic images of this amazing coastline.

I like this view. It puts the formation in perspective. The gap is interesting.

What an amazing story- I feel guilty that I don't seem to recall the collapes...usually world geological events like that always catch my atention. And What a beautiful composition, DarkElf - I like the perspective and, coupled with your dialogue, it really is quite astounding1 Great piece here :-)

Nice shot. I have walked out on there when it was complete. I remember fearing it would collapse as is vibrated with the smashing of the waves underneath. My father assured me that the rock was so thick that we were safe. I am glad I wasn't one of the couple that were trapped out there when it did fall! (They were recused by helicopter)

Beautifully-composed shot with stunning colors!! I love that "strong" horizon with the deep blue water.

This must be along that famous Ocean Road, it's so much like the coastline in South Shields, except on a huge HUGE scale :-)

That is absolutely amazing. Excellent shot.

Hope no one was standing on it at the time. Great shot and info.

@Philnz: hello Phil! Helen has kindly informed that actually there was a couple standing right at the end (on the arch now visible) and they had to be rescued by a helicopter... luckily no one was hurt though...

wonderful series! what a place ...