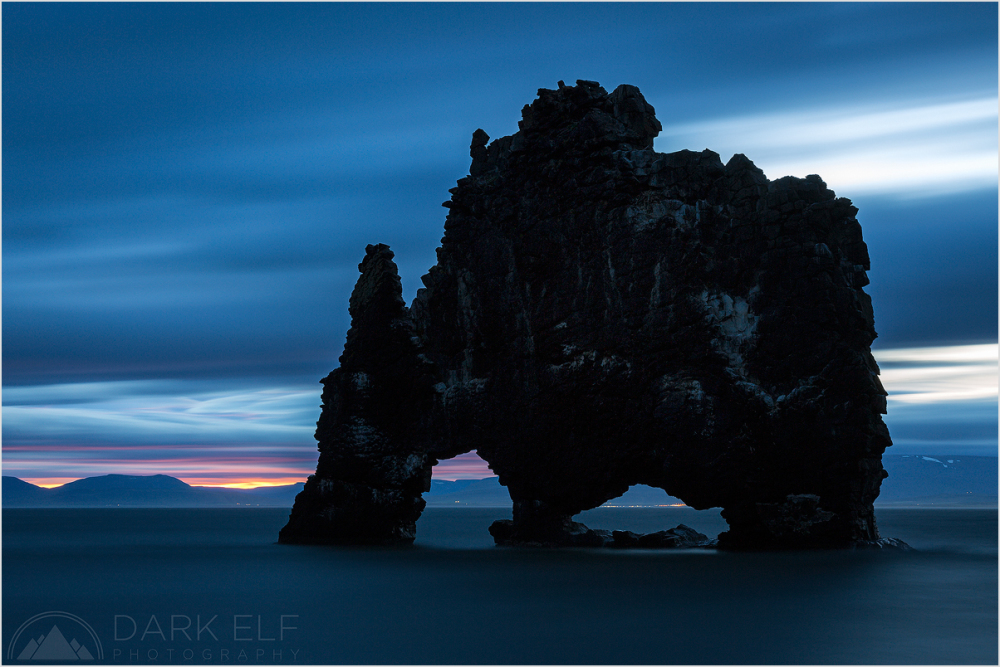 Posted by Darkelf Photography (Perth, Australia) on 21 December 2015 in Landscape & Rural and Portfolio.

Some call it a troll, others a dragon, in Iceland it is called Hvitserkur and I will call it The Giant. Here it is awakening during my dawn shoot on the eastern shores of Vatnsnes peninsula.

The clouds were moving very fast and what started off as a calm morning quickly became a struggle against strong winds that arrived from the south. I do not think I have ever experienced such powerful sustained winds as on that day.

There were only glimpses of sunrise colours over the horizon but it was still fascinating to be there and to see this rock through my own eyes.

I would like to wish everyone who celebrates this time of the year a Very Merry and Peaceful Christmas!

wow, this is perfect again! the subdued light that's so typical of iceland, and the wind that you mention ...
i can well imagine it !!!
a very happy christmas to you, too !

Impressive silhouette against the calm tones background... And just a little glimpse of warm colors adding some extra touch.

Your narrative really sets the mood for this beautiful shot!! The Giant makes a great silhouette against the dramatic cloud formations and colorful sky!!
Merry Christmas to you as well!

The Giant is such a menacing figure rising out of the water. I can imagine your delight being there and seeing this beautiful scene. Merry Christmas!

A spectacular image! This is just beautiful! Merry Christmas!

This is so beautiful and moving, sir! I like how you were able to "calm the waters" even in the fierce winds....the clouds in the distant sky are smooth as silk, and the colors are calming. This massive rock strikes me as a giant mammoth or elephant..These rocks seem to rival those seen along the coast of Washington State's olympic Peninsula - not so much in shape but in size and dominance...Beautiful sir. Wishing you both the best of everything and thank you for your gifts of beauty and inspiration to all of us :-)

Great silhouette on this wonderful place. A spectacular shot here! *****

Thanks for sharing your trip to Iceland ... A great pleasure to travel along through your personal approach of this magnificent country.

@Gilles: Thank you for following my Iceland travelogue Gilles. I am glad that you enjoyed it :-) It is definitely a wonderful place and I hope to visit it again.