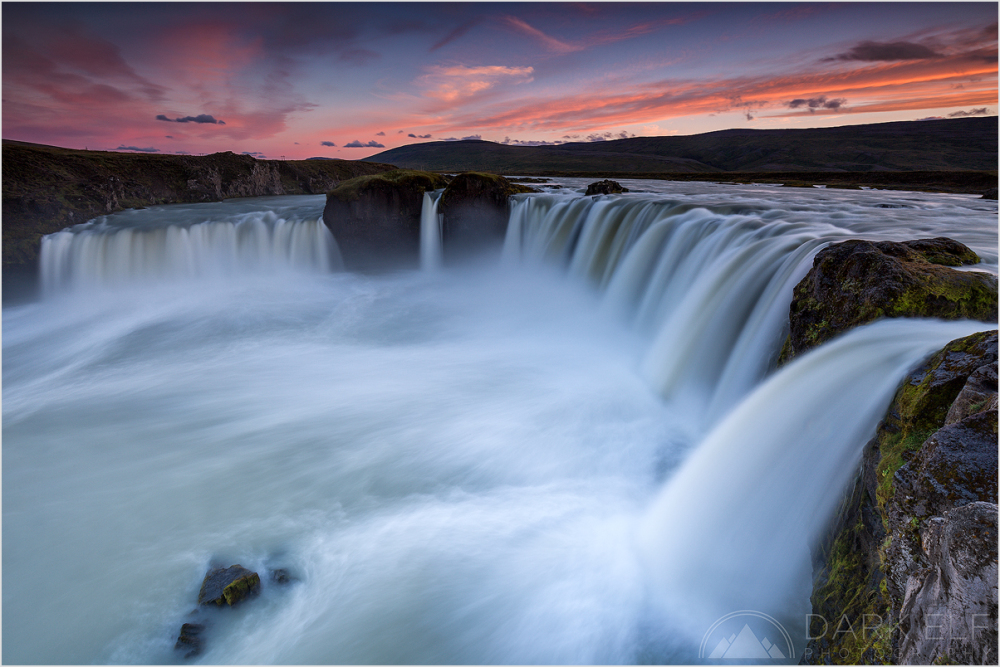 Posted by Darkelf Photography (Perth, Australia) on 2 January 2016 in Landscape & Rural and Portfolio.

Godafoss - the Waterfall of The Gods - is one of the most spectacular waterfalls in Iceland. It is located in the north-central region along Route 1 between Akureyri and Myvatn.

It was raining heavily in the days before we visited the waterfall and the flow was massive. This meant that I had to watch the wind direction to avoid excess spray ending up continuously on my filters. Sudden changes in wind direction were especially annoying.

The spray did not worry me too much though because we were greeted by one of the better sunsets during our entire Iceland trip. I had plenty of time to scout various composition and this was not an easy task, as the falls are massive and no one angle can really give the idea of their size.

I hope you enjoy my first post in 2016 and I look forward to seeing all of your new photos this year!

Gorgeous.
Wish you a Happy and Prosperous New Year 2016!

Beautiful capture of this legendary place! Have a great light in New Year :)

what joy it is to view your impressive and absolutely brilliant photos of iceland! now i can't wait to get there again ... ;-)

@franz: Thanks Franz - I do hope they brighten up your day just a little bit :-)

another great view from the edge of the world

Hi DarkElf! Sorry I have been so infrequent lately. Lots of medical items coming up so I will be even more scant but this image here really provides a breathtaking and beautiful scene. I completely agree with my old friend Mr Franz Zach whom I shall be visiting next. I will send you an email...HappyNew Year to you both;-)

@Denny Jump Photo: Thank Denny. I hope all is well with you.

What an awesome composition with gorgeous contrasting colors!! The slow shutter speed really gives the waterfall a feeling of force here. 5*****

waterfalls and such by Franz