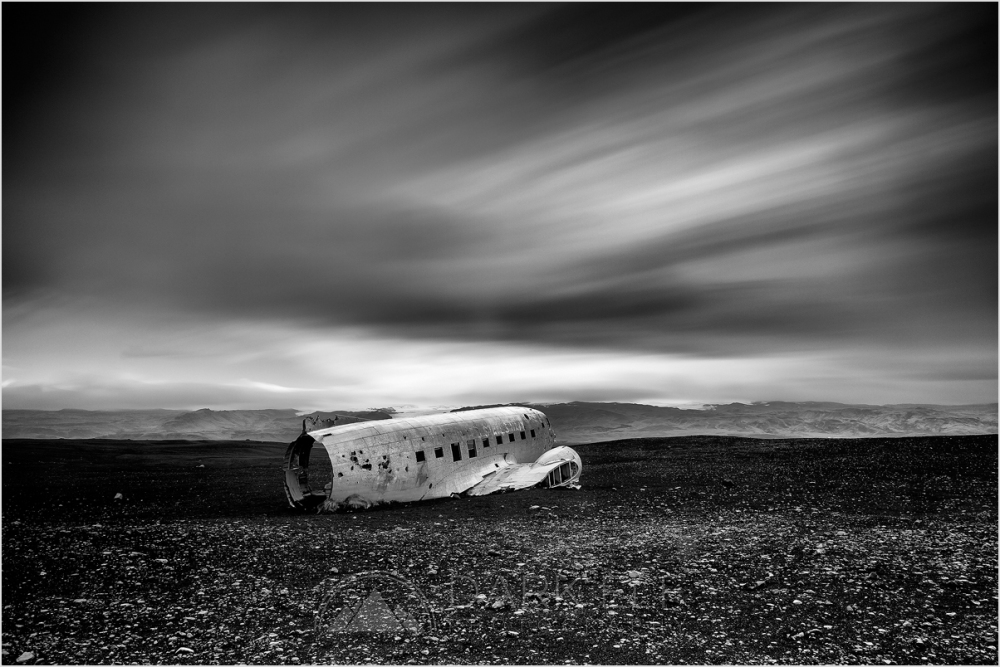 Posted by Darkelf Photography (Perth, Australia) on 9 January 2016 in Transportation and Portfolio.

In 1973, the US Navy airplane - a Douglas Super DC-3 - crash landed on Sólheimasandur beach in Iceland after what was later found to be a pilot's error. The crew all survived the impact, but the plane was abandoned rather than recovered - and lies there still in the middle of the black desert that surrounds it.

While this spot has become a lot more popular and accessible in the last few years, it was still on our list to visit and the experience of seeing the remains of the plane abandoned in the middle of nowhere was fascinating. Probably even just five years ago not many people would have known where to find it and how to get to it.

You can see the wreck in my photo and the desolate landscape around it. I went for a long exposure as the clouds were moving very fast and this gave the scene a bit of a surreal quality. I like the way the movement above contrasts with the stillness of the foreground.

Thank you all for viewing and commenting and I hope you continue to enjoy my perspective of Iceland :-)

the overexposure added drama in this frame***

Nicely documented. Where are all the other bits?

@grouser: Thanks Grouser! The rumour has it that the engines and the tail were removed by local farmers, either to be re-used or on-sold to others.

Wonderful image. I like how you have positioned the plane in the frame which emphasizes expansive isolation.

phenomenal image and presentation! the long exposure worked exceptionally well as it really enhances the ide of the moving clouds! and the bw processing fits the desert perfectly, too!
can't wait to see more 'your iceland'!

A beautiful and haunting image. I love the light on the plane and vast expanse of the scene.

The composition, long exposure, and processing make a very effective image of desolation.

Wow! This is Very Cool! The long exposure and B&W really provide a super visual and imaginary impact! I absolutely love the stark And dramatic sensation that just leaps out at me! Beautiful job sir! ;-)

What an amazing find!! Thank you for the background information. I love the contrast between the quickness of the sky and stillness of the ground. It seems to tell a story as to what happened to this plane.

Fantastic shot. Love your treatment in Black and White.

Very interesting and a bit sad. Reminds me of the book "Frozen In Time" by Mitchell Zockoff. It is a true story, takes place in Greenland, not Iceland, but this could be the cover photo. It's a good read!

That is an exquisite shot. My favourite of the day.

What a fantastic spot!
One more place to add to by list of must-visit places!

Rosso from Luserna s.Giovanni (To), Italy