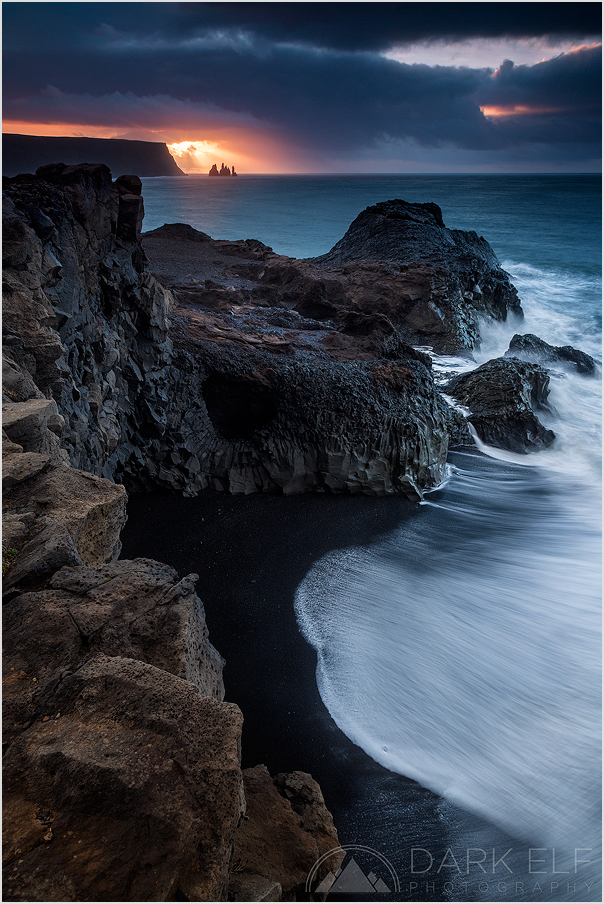 Posted by Darkelf Photography (Perth, Australia) on 30 January 2016 in Landscape & Rural and Portfolio.

This is another photo from my morning escapade to the rugged coast near Vik in Iceland. Shooting in the morning was a great experience for me, mostly because I was usually alone at the locations I have picked. I had all the time to take in the light and landscape and I just felt a part of the scene that I was trying to capture.

The clouds were rolling in very fast that morning but they were broken up enough to allow the occasional ray of sunshine to break through. In this scene that light burst through beautifully right over the sea stacks - Reynisdrangar - in the background.

Basalt rocks that form the coast made for an intriguing mosaic, water movement made up the rest of the scene and filled the black sand in the foreground. The waves are usually huge and very dangerous here and this time I have chosen a higher vantage point so that I was reasonably safe from their might. One is never too safe around the coast and I still had to be on a look out for any larger wave as it could easily reach even the spot where I was standing.

@Jean-Louis Guianvarc'h: Many thanks Jean-Louis

An amazing sight! I love the dark dramatic clouds and the sunrise in the distance. Outstanding! 5*****

The way you have slowed the waves makes an effective visual contrast with the hardscape of the rocky coast.

So magical, DarkElf...I'm not sure what happened, I thought I had left a comment earlier today my time but apparently forgot to save it :-) But I agree with Julie and Gary - you have given us a dynamic array of elements and moods...This is just a super piece here....I love it :-)

A fantastic scene as from another world. Terrific work.

more and more i'm left speechless by your stunning images of my favourite places in iceland ... ;-)

I love these basalt formations there... And this composition is just perfect, light shining on these famous cliffs in back.

Amazing coastline. I particularly like the silhouette of the rocks in the sunlight