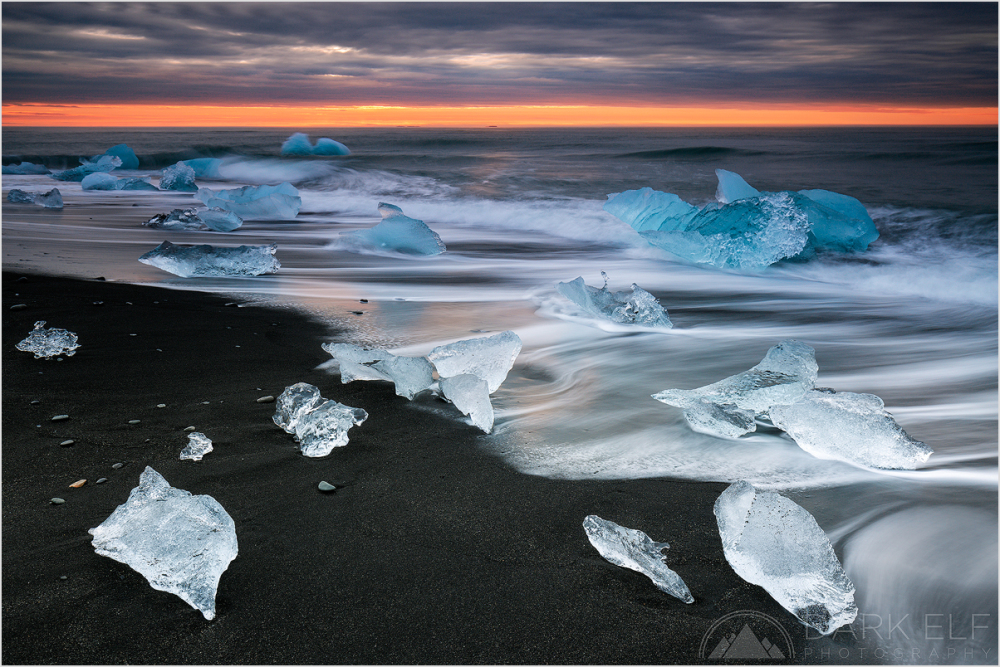 Posted by Darkelf Photography (Perth, Australia) on 3 February 2016 in Landscape & Rural and Portfolio.

Breiðamerkursandur - that is the Icelandic name for the black sand beach near Jokulsarlon Glacier Lagoon where many of the icebergs return to shore after being pushed out to sea by the receding waters of outgoing tide.

It was a bit tricky shooting the icebergs because of the incoming waves and the imminent danger of one of the icy bits crashing into my legs or my tripod. I have purchased a pair of wellington boots in Reykjavik and they came in very handy that morning. In addition, the icebergs were pushed around all the time and timing the shutter button was crucial to capturing as many of the as still as possible.

It was a glorious morning, may be without too much sunrise colour, but the ice show on the black beach more than made up for that. Despite seeing numerous photos in the past, I could never quite envision what it was going to be like in real life. Spectacular - that is what it was!

a surreal quality with the light/colour and ice on the beach. Excellent

Good Lord!! This is as much of a Light Show as an Ice Show,....Light and Beauty that smashes into the eyes...What a wonderful image, DarkElf....And your timing was very obviously impeccable with the shutter...This truly MUST have been a big thrill for you. I don't think I will ever see this place in my lifetime, beyond these images, so I thank you from the bottom of my heart...Just magnificent, Sir!

@Denny Jump Photo: I am glad you like it Denny :-)

Beautiful shot! I absolutely loved visiting Iceland. The country is literally Beauty-Full in every way.

@Ryan Hammond: Indeed it is! Thanks Ryan

I looked at several pictures. You are a fine way to find water movement.

Wwhew, I love this one too!
This is such a quality series!

magnificent inclusion of light and colour at this magical place!

Same blue I saw in Antarctica, but I didn't see anything like this.

I definitely need to go back to Iceland just for this spot :)
5*

This image has been featured in 6 Remix collections.