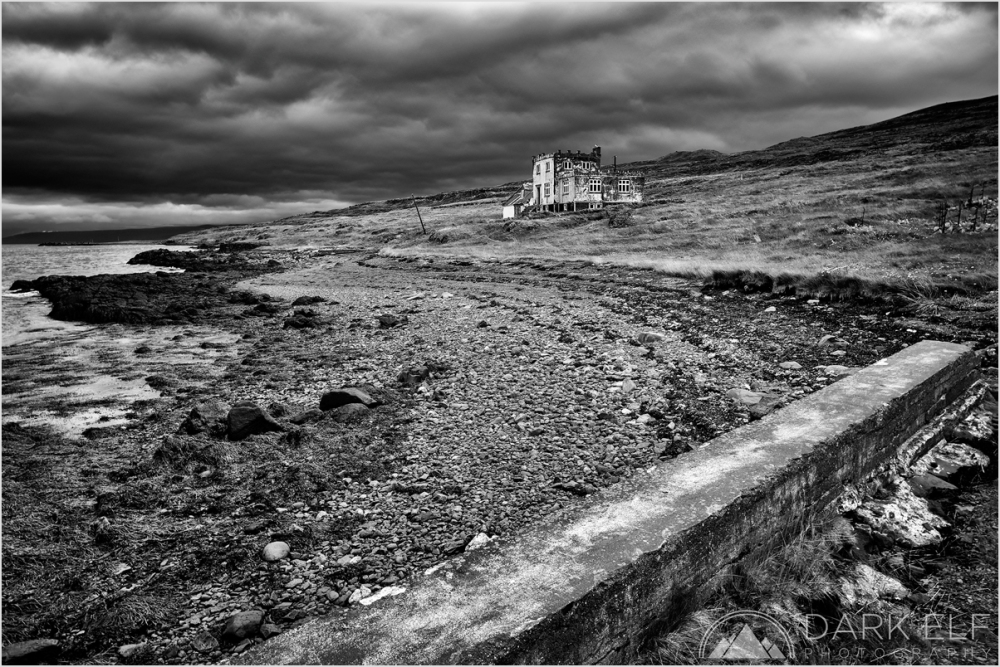 What Once Was Is No Longer...

Posted by Darkelf Photography (Perth, Australia) on 21 February 2016 in Documentary & Street and Portfolio.

...but it may yet return back to life.

Before we set out on our drive from Isafjordur in the Westfjords to Hvammstangi we found some information about this old abandoned house or "the old castle house" that could be found on the way. We did not have an exact location, only a rough idea of where it may be located. We managed to track it down during our journey and stopped there to take some photos. In the end it can be spotted quite easily from the road near the locality of Arngerðareyri.

It was built in 1928 when times were a lot better and full of life in this area. The owners abandoned the house in 1966 and gradually it fell into ruin. Apparently, it has been purchased by a German couple who plan to restore it to its former glory. Hence my title and lead into this post.

For now it presents an interesting alternative to capture something a little different in Iceland and no doubt it is high on the list of interest of "urban explorers" who like to photography abandoned buildings. I am not exactly one of them, but I am not one to shy away from an opportunity to expand my photographic horizons.

I may yet post a colour version of the house but the weather, conditions and the abandoned atmosphere sang "monochrome" to me when I was scouting out compositions and angles for my photos. I chose a wider perspective here as I found a good foreground element that I wanted to use and for me it also adds to the general "urban" decay feeling of this scene.

A gorgeous capture of this old house. I hope it gets restored.

This building looks so cold and bleak.
Desolate even.
I cannot help but wonder why someone would want to 'restore' a building in this remote and harsh land. Write a novel about it perhaps?
We are all different. We must rejoice that we have that diversity.

The B/W accentuates the wonderful bleakness of the scene

a wonderful find and a great photo opportunity (and result) for sure. amazing how one often finds the unexpected in iceland!

Wow, what an amazing place, i love the building in the middle of the beach, really good image. works so well in Mono

@Alun: Many thanks Alun

Beautiful monochrome !!! the cloudy sky gives a dramatic atmosphere to the scene ...

Absolutely gorgeous. I love the perspective. Such a dramatic image! Very interesting information.

The processing really enhances the sense of decay. Well done.

This is a wonderful composition, DarkElf! I love the way in which you have employed this boundary wall to lead the eye to the house and surroundings beyond. I would love to see how much the cost would/will be to actually restore this place...and if they have any cash left over after the process, i would certainly use some :-) Cool shot sir - And it is aways Such a treat and a thrill to follow you and your ever-inspiring and magnificent images!

Very dramatical sky!
A great b&w but I would have removed the wall from the composition. In that sense I prefer the color version.

Both color and B&W are superb. Though I prefer this one because of the toughness emphasized here.