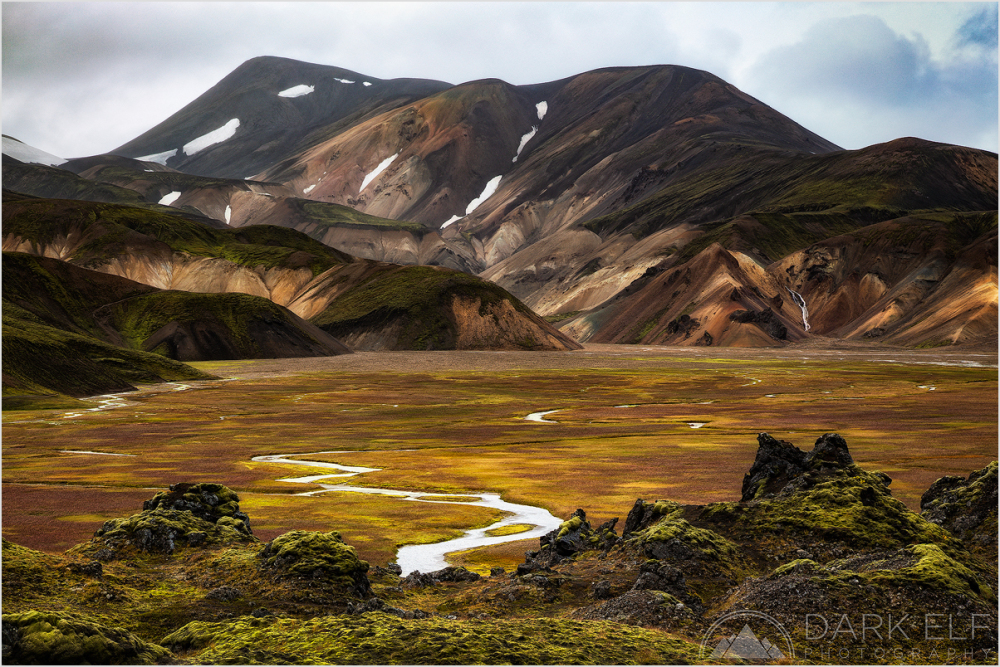 Posted by Darkelf Photography (Perth, Australia) on 9 March 2016 in Landscape & Rural and Portfolio.

Landmannalaugar is one of the most incredible and one of the toughest places to get to in Iceland. You can access it from the south or from the north. We chose the northern path via Route 26. I can tell you that the last 20 kilometres of this road were just painful. Rocks, holes, stones and mud really take their toll and you have to be very careful driving along. Of course a 4WD is required any F road in Iceland, even though new have seen many people attempting the drive in small 2WD vehicles. At least there were no major ford crossings. There is one right at the end but you do not actually have to cross it in the car. You can follow a path to the visitors centre on foot and leave the car on the other side of the river.

The weather changes rapidly over Iceland and especially so in places near mountains and hills. Landmannalaugar was no exception. We had strong winds, sunshine, rain and overcast conditions continually mixing it up as we drove there. We were lucky enough that when we started our hike through the Laugahraun lava, we got nice clear weather, at least for the first part of the trail. It quickly deteriorated from there, however, and conditions first became gloomy and then the drizzle arrived.

I took this photo (with a few others) just as we got to the really interesting parts and just before the drizzle became annoying enough to start heading back to the car. I can only imagine what this spot would look like on a sunny day with all the colours of the rhyolite hills coming through. It took a bit of processing power to get this photo looking like I envisaged and in the end I was quite happy with the result. The early Autumn tones came out beautifully in the valley and the layered hills in the distance give at least hint at their real beauty.

Beautiful. You really travel to wonderful places and take the most amazing photos.

Wonderfully painterly landscape indeed. Worth the effort and the drizzle :)

Beautiful image. It looks like a drawing. Superb exposure.:-)

a fantastic 'portrait' of this iconic place, even if conditions were not ideal! i have yet to go and see landmannalaugar! it was on my list last year, but the the weather was really too bad and we did not go! well, another year, another chance ... ;-)

@franz: Thanks Franz! Yes, as you well know, the weather is a major factor in Iceland :-)

A wonderful image with such tonalities.

That really is a stunning mountain , I love the flat land in front . Lovely colours

What a splendid and pristine landscape that you've captured here!! I love the contrast in the textured and smooth landscapes between the background and foreground. I can only imagine how tattered it would look if it wasn't one of the toughest places to get to.

The road sounds like some I've driven in the Desert Southwest of the USA. You were wise to drive slowly and carefully. I do that, too. What a magnificent payoff you got with this gorgeous place. An exquisite image.

This is an exceptional photo.

Lovely - great mix of colors and I loved the story.

Well composed scene, and your treatment gives it an oil-painting mood.

Absolutely stunning! The landscape and the scenery is just spectacular.

Absolutely stunning! The landscape is just so beautiful!! *****

Brilliant..what a marvelous homage to this fabulous place