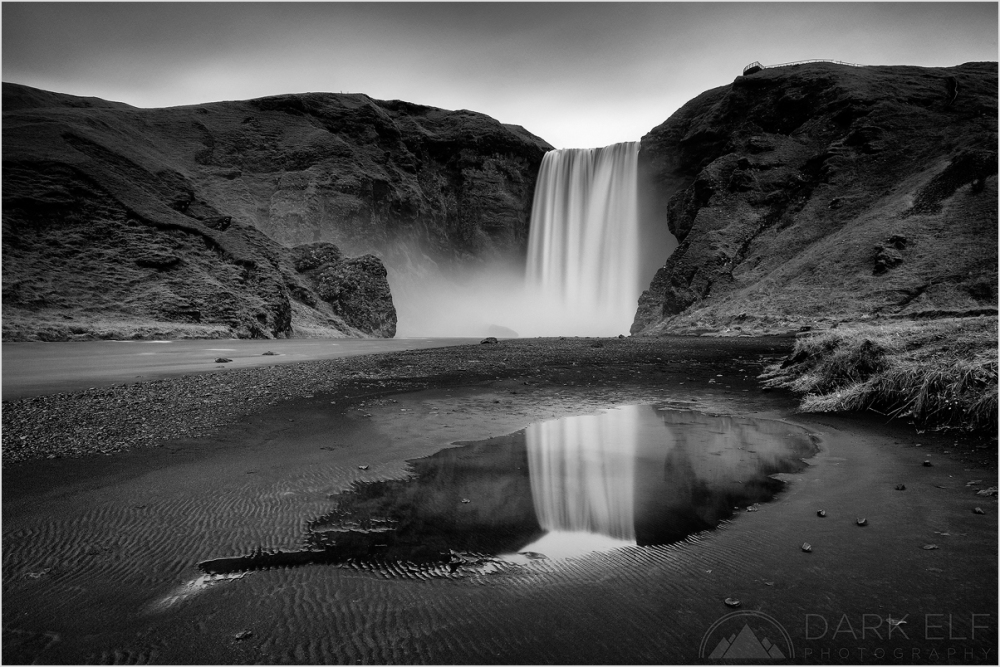 Posted by Darkelf Photography (Perth, Australia) on 16 March 2016 in Landscape & Rural and Portfolio.

Another well known and easily accessible waterfall in southern Iceland - Skogafoss. Only a little further up the road from Seljalandsfoss when travelling from the west.

I took this photo on the morning of the same day as the previous one. I was pretty much travelling up and down all day. Morning to Skogafoss than back to Vik, then to the Dakota plane wreck, then to Seljalandsfoss and then back to Vik again. Iceland is just like New Zealand in the way that there is something new and exciting behind just about every corner of the road.

It was hard to come up with a new composition at such a popular location, as most of the angles have been covered already. However, it was one of the waterfalls that fascinated me the most from previous photos I have seen and I was very keen to photograph my take on this spot.

In the end, I enlisted the help of a big puddle of water to hopefully capture something at least a little different (although I am sure it has been done before too). I worked the angle and composition to have the Skogafoss reflected in the still surface of the water. The conditions were quite bleak and misty so I had a mono conversion in mind for this particular shot. Converting to monochrome usually brings out quite a lot of hidden detail and extra contrast as well.

I hope you like my effort at Skogafoss and thank you for your comments on my previous photo. I am totally humbled to receive another spotlight.

Once more, a great scene and a high technique to obtain this magnificent view.
Your rewards are deserved.

Once again! Absolutely wonderful! I would like to see the same in colors!

@maximage: Thanks Max! May br one day I will post a colour version, however, the tones were very dull on that morning.

this monochrome conversion not only works very well, it also conveys that 'iceland feeling' 100 per cent when the sky is grey and without a trace of sun. great idea, too, to 'enlist the help of the little pool'. i will of course go and look for it when i get there in summer ... ;-)
(did you climb up the more than 400 steps to the right of the fall as we look in order to get to the platform? if not, don'! it's not worth the effort !)

@franz: Thanks Franz! Yes, we did climb all the way up the 400 steps, more for exercise I think than anything else ;-)

This is a beautiful composition for that iconic place... Besides the reflection, a sand pattern around it is very attractive, too.

Fantastic! The reflection makes the image.

Gorgeous capture of this waterfall!! I love the way it appears illuminated in this shot!! And excellent mirror-like reflections!

This works so well in Mono, Stunning, great reflection

Really superb place and photo with the reflections ! and perfect mono !

Wonderful..the ribs of sand around the puddle frames it beautifully

The reflection is the great add-on to this compo. Excellent !