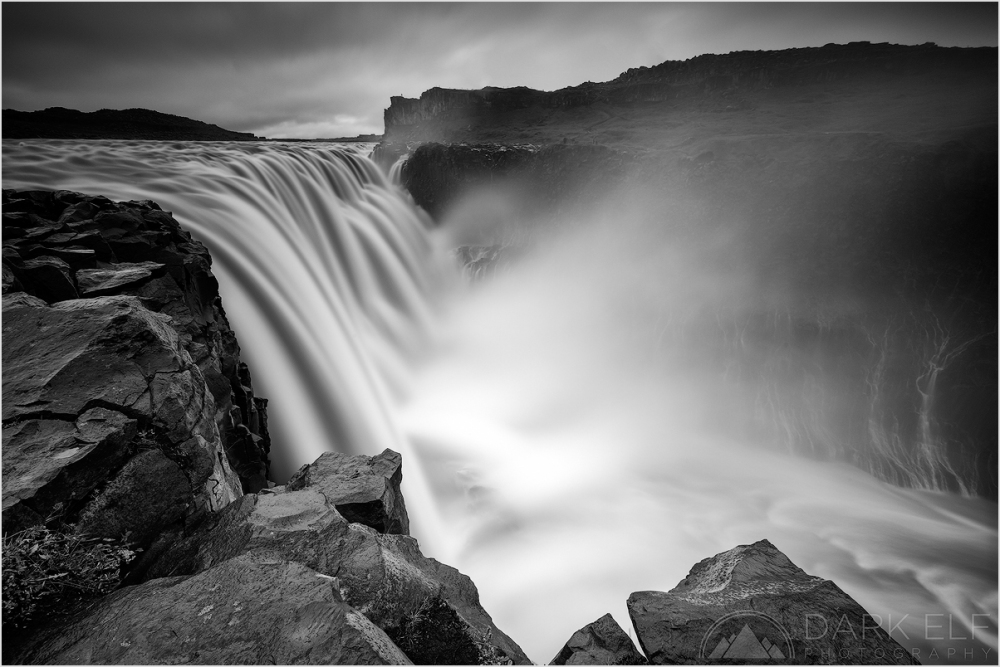 Posted by Darkelf Photography (Perth, Australia) on 19 March 2016 in Landscape & Rural and Portfolio.

Staying with waterfalls and monochrome for the next couple of posts.

Iceland is a waterfall heaven. There are apparently over 10,000 waterfalls in this country and just because of that I could live the permanently :-)

I have previously posted photos from the Selfoss waterfall and Dettifoss is located very close to it, about 1.5km further north on the Jökulsá á Fjöllum river. In fact, when you walk on the eastern side of the river, you first have to pass Dettifoss to get to the other waterfall.

This is believed to be the most powerful waterfall in Europe. It is around 100m wide and the drop is just over 45m. One really does feel the power of this waterfall, no matter which side of the river you stand on. The flow is quite hypnotising and it was hard to take my eyes of it when we had to finally leave.

Dettifoss featured in the movie Prometheus - the prequel to the Alien series of films.

Dettifoss is such a powerful place! Unbelievable amount of water is running through the rough landscape... I like these glossy rock surfaces just observing the show.

: Helen : from from somewhere in, Indonesia

Softness of the water is relaxing, and yet...
An impressive landscape.

Great use of long expose

fantastic processing once again, this time with two superb effects - the 'milky' water puts me in a kind of 'dynamic trance', and the sinister monochrome tones enhance the bleakness that can reign over this fall (as i have repeatedly witnessed ...)
as for your intro, you speak from my heart! i could 'live' travelling from one waterfall to another (much to the chagrin of my wife irene ... ;-)

@franz: Thank you Franz! I am glad that you share my feeling about this waterfall :-)

Waow! So beautiful once again! A fantastic place nicely captured!

I gladly agree with my wonderful friend, Franz, here!! It is so easy to sense your emotional connection in your words and displayed in your truly magnificent images and rendering of them to us. And I can certainly identify with your feelings and the unstoppable desire to keep looking back even as you are pulled away by others ;-)
This is hypnotic Sir!!

This is absolutely stunning, I too love waterfalls and agree with what others have said about this photograph, it is indeed beautiful.:))

@Linda Candilas: Thanks Linda, as always, for your continued interest and support :-)

I like, how You showed dynamics of water. Splendid composition.:-)

Wow those textures are masterpiece !