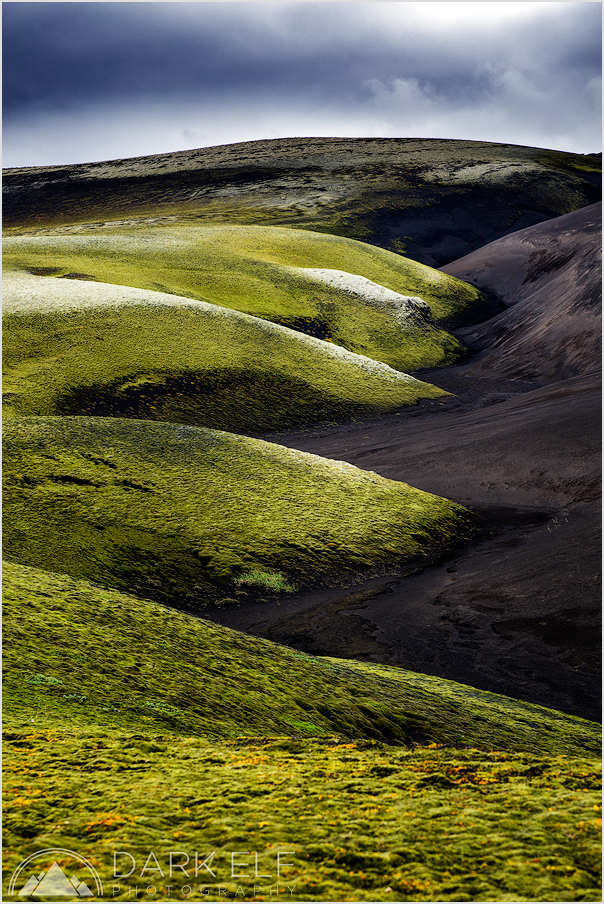 Iceland is full of grandiose landscape and iconic locations. While hunting for the shameless trophy shots, I was also on a lookout for something a little different - strange patterns, bursts of light, unusual formations or contrasting landscapes.

The barren and desolate area of Lakagigar was full of such unusual elements. The area is famous for an event that took place in 1783, when an extensive set of fissures opened, forming around 135 craters (hence the name Lakagígar - Laki craters). The craters then spewed molten rock up to 1km into the air devastating the surroundings and causing wide spread consequences for Iceland, Europe and even as far as Alaska and Japan.

The fissures are a sight in themselves but the the terrain around them is just unbelievable. Green and vibrant in places where vegetation has covered the lava, and dark and eerie in other places where black rocks and ash have a sinister edge to them. Together they make for an interesting contrast and this is what fascinated me the most about Lakagigar.

That and of course just driving there is an experience in itself. Around 40km of dirt track (coming from the south) and we had to cross seven streams on the way there. Even simple ford crossings are not for the faint-hearted and one has to be treading very carefully. We were lucky that the ford levels were reasonably low. The journey one way took over two hours.

I hope you like this different look at Icelandic landscape. Let me know what you think.

Yes, this is really a great view, with the contrast of colours and the curves wich join and mix together.
Different and very pleasant.
Thanks for explanation.

@Dany Hèm-Kervran: Thanks you Dany

What an unique landscape. Nicely captured.

I am loving this and appreciate your documentation Iceland is certainly on my bucket list and images such as this just fan the flame.

A very beautiful capture of the contrasts you mention between the bright greens and darker more threatening grays. Beautiful light accentuates this contrast.

i will gladly tell you what i think, maciek! this is another outstanding 'portrait' of the essence of iceland - the combination of seemingly 'impossible' colours and textures and patterns and contrasts.
i particularly like the vertical format here, as it allows us to follow the borderline between the green/white area and the black area into the depth of the picture.
the laki catastrophe was indeed a shattering experience for the people of iceland, and some historians even connect it with the outbreak of the french revolution, as the ashes and gases released in iceland were held responsible for several crop failures in france that aggravated the situation there ...

@franz: Thank you Franz! Indeed it has had a very wide impact. That made vising the place even more profound and it does look like the Earth has been torn apart in places.

I enjoy this landscape as much as the other more spectacular ones. I've been to Iceland and dream of going back there. Nature offers wonderful sceneries.

@Mireille T.: Thank you Mireille. I am already thinking of another trip to Iceland as well :-)

A wonderfully-composed shot with beautiful colors and textures!! The alternating colors of green and black down the center create a nice rhythm here. It is amazing how there can be so much beauty in a land so barren.

I like the compo with the curves and the contrast of colors. Very beautiful !

Such a great shot,
I love the colours .

Hi Maciek...Wow! What an amazing scene this truly is. My pal Franz took all the words from my mind and mouth - if you can believe that - but there is so much emotional impact for me as I look at this scene, it is something that excites the soul and enriches the mind because we realize that we have not "seen it all" just yet, but you are helping us to take a big slice out of the unseen. I am SO happy that you have visited here, because your eloquent descriptions and magnificent images really transcend all that I have ever seen. The varietal beauty of this wild place is amazing. The image that you have shared with us is something the likes of which I have never imagined..This is Just beautiful! Thank you so much for letting this old man blab on! :-)

@Denny Jump Photo: Many thanks Denny. I am happy that my photos can stir such emotions within you. That makes my efforts so much more worthwhile :-)

This is stunning. Great shot.

Amazing landscape. Thank you for including the background info.

Like a zipper on the earth's ground :) Wonderful contrast between the textures.

This image has been featured in 5 Remix collections.