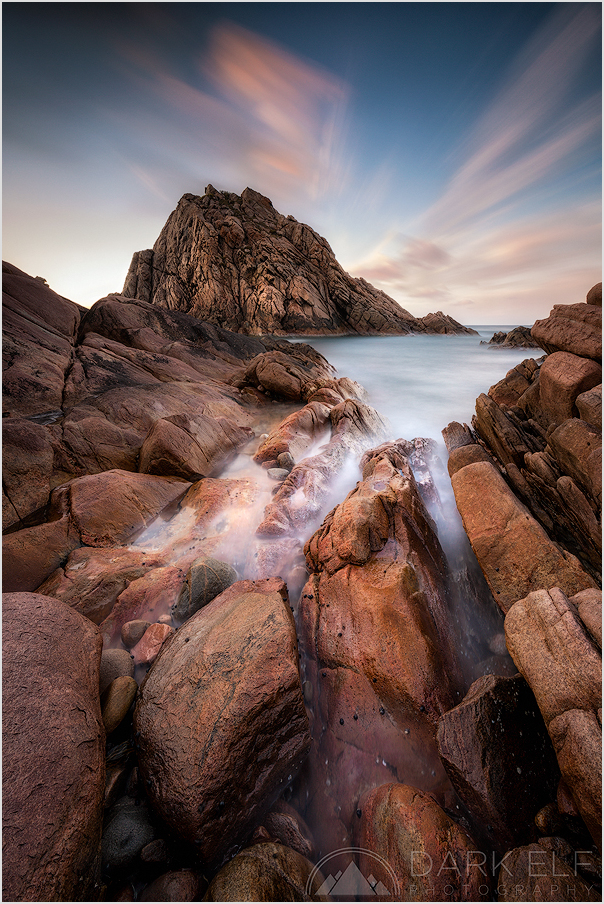 The tide was low and I could not get good water movement that I wanted. Therefore, I settled on a long exposure that captured interesting movement of the clouds and gave a misty look to the rocks in the foreground.

While there was an evening breeze and small clouds were moving from west to east, the high clouds moved from north to south and thus you can see the two different cloud movements captured over the Sugarloaf Rock.

I will be away for over a week, travelling to Blue Mountains on the east side of Australia. I hope to catch up on your photos once I return.

: Helen : from is back at home in Melbourne, Australia

I adore these photographs. The lack of water here certainly did not detract from the beauty of this photograph!

Fantastic composition and colour. Love the fact the sharp angles of the rock draw me into the photo and usher me to the right, finally reaching this beautiful sky. Bravo 5*

A gorgeous image. The water coming over the foreground rock add a sense of urgency to the photo. Very dramatic.

The water falling down looks as ice, it's magnificent.
The photograph IS magnificent, and your patience gives us a wonderful view.

I like this, it's lighter and the softness of the waves are magical.:))

Great rendering of textures of the rocks. Nice effect in the sky. Very beautiful !