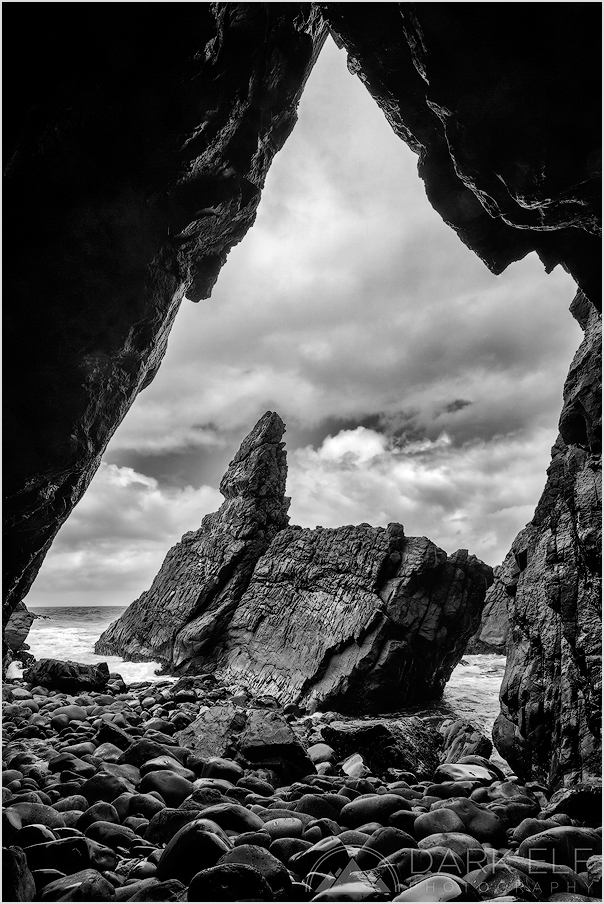 In February this year we embarked on a one week trip up the central and northern coast of New South Wales in Australia. We travelled from Sydney through the Central Coast, Newcastle, Port Macquarie to Coffs Harbour.

Most of the east coast of Australia abounds in amazing scenery along the shore. Variety of rocks formations, high cliffs, extensive rock shelves and often high swells. We wanted to explore some previously visited spots and also discover some new ones - just like the one in this photo near a spot called Crescent Head.

This weirdly shaped rock that looks like it has just fallen from outer space and the cave from where I shot this image can only be accessed at low tide. Because of that and also because they are hidden from the open view, it seemed like this long forgotten world. When I was sitting there in the cave I felt like I was was on another place long way away from civilisation.

We only had time to stop by once and only during daylight but I was still hopeful of taking a photo that could later be processed as monochrome and this is the result.

Robinson Crusoe could have taken this photo...
Thanks for your explanations about it.

Nice catch with the feeling of a strong and hostile nature , the B & W reinforces this feeling

A post apocalyptic world!
Great and dramatic photo with a strong editing.

Beautiful natural frame within the frame !

A splendidly-framed view with beautiful textures and formations!!

A truly spectacular image that is fabulous in B&W.

I was so intrigued by your situation inside that cave - being apart from the present day world and somehow being in the state of an other world..What a feeling that must have been! The rounded rocks covering the floor really are an impact on this scene, as well as that diagonally shaped rock that truly DOES look like it just dropped (THUNK!!) onto the ground from outer space... I agree with my friend, Steve! This is masterful image here - especially in Black and White...Wonderful image, Maciek :-) dj

It sounds like a very special spot. I like the treatment as it gives that otherworldly feel. Stunning