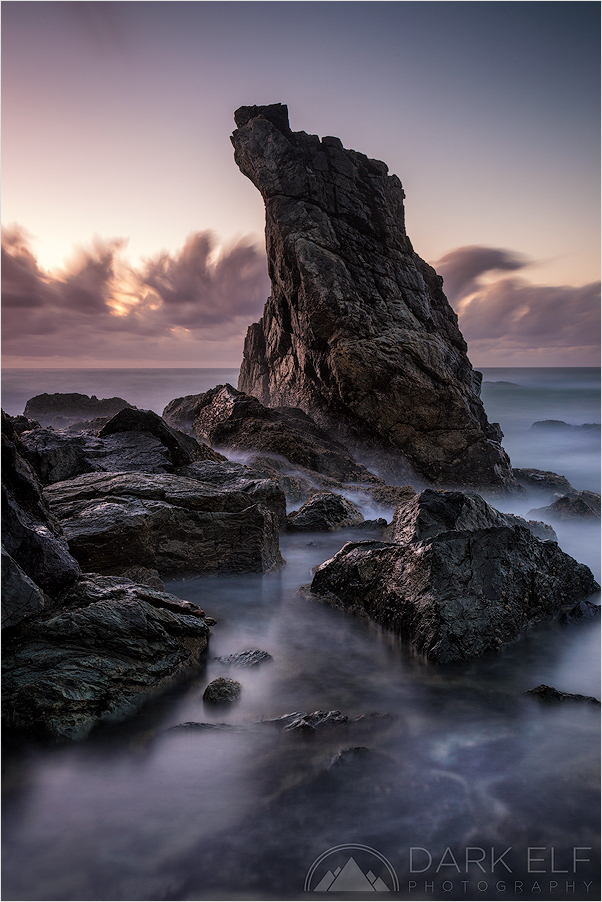 Out Of The Sea

This strange rock can be found at the Lighthouse Beach near Tacking Point Lighthouse in New South Wales, Australia. I took the photo during my series of morning escapades when we visited the region in February this year.

The tide was just beginning to rise and the waves coming through around the rock were getting bigger and bigger. I tried first to catch some of the wave action, looking for some good flow in the foreground but I just could not get the right wave. Instead I decided to go for my plan b - a long exposure.

I was much happier with this photo. Long exposure revealed some of the detail underwater in the foreground and it also gave the clouds and interesting look with their stretched out tips suggesting that the wind towards the shore was only just picking up. I am also a total sucker, as you may have discovered by now, for that misty water effect between the rocks.

Your choice leads to a wonderful capture, and the clouds look "in action".
A great series.

Beautiful scenery and silky sea.
The clouds are the cherry on top.

Beautiful water scene... I am speechless!

Marvellous rendering of the clouds and the sea! Strikingly beautiful photo!!!

Spectacular! A giant beast emerges from the water.

A stunning seascape composition with excellent formations and textures!!

The contrast between the roughness of these rocks against the silky texture of the water is just magnificent ... Spectacular image !!!

Superb rendering, i love the tones and the mood.

The long exposure creates the perfect complement to the structure and texture of the rocks.

This is absolutely perfect... I love how it connects.

Stunning photo - the rocks look like magnificent sculptures on the shore.

Hi Sir - I think I mentioned something like this on FB as well, but the dramatic see here is amazing. The rock appears to be a creature rising out of the water... I LOVE this one :-)