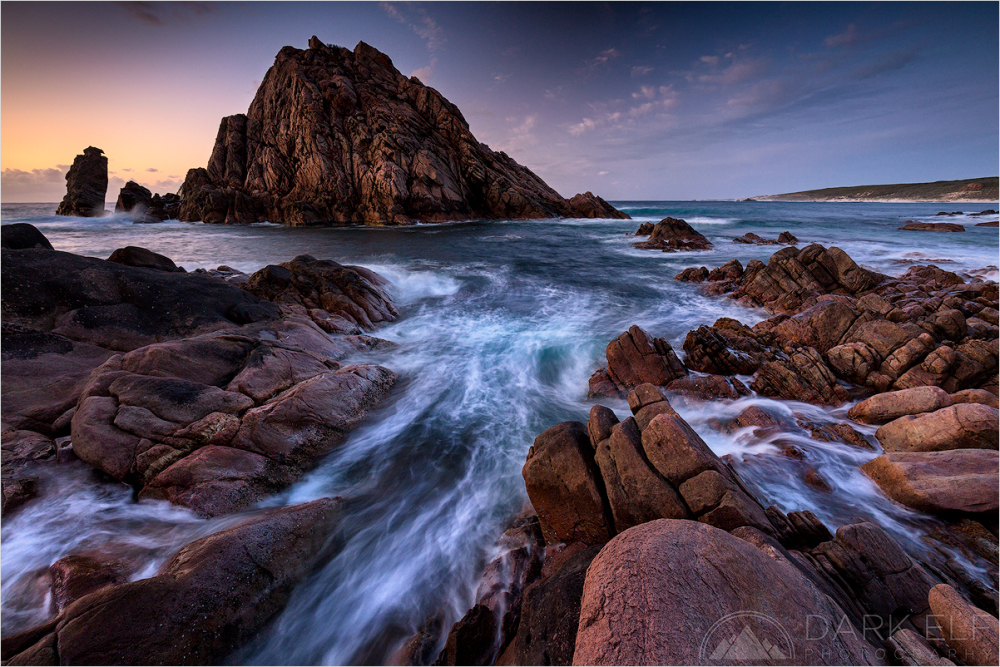 This spot featured previously in my posts. This is the Sugarloaf Rock in the south west region of Western Australia. I have started to explore it more thoroughly only in recent times. I was able to spend a couple of evenings there late last year and that allowed to me to roam the area in search of different compositions.

In this instance I wanted to get down between the rocks as much as possible and catch some of the great flow and motion of the incoming waves. It was a gentle evening with low tide and I was able to get in very close to the water.

I used a polarising filter in this photo and it had a pronounced effect on the sky, rendering the tones slightly darker and more unusual than one would expect at dusk. I quite like the effect and I found that it added something extra to the mood of this scene.

Another beautiful picture as I like and as I like to do.
Thank you for your explanations , good day

This is very beautiful !

Taken close to the rocks, this shot is very dynamic ; all the colours are strong, and this photo is once more a marvel.

A stunning composition with colors, light and textures that come together beautifully!!

I like the way that you got down low.

Besides the rock textures, the sky is beautiful too, indeed!

Yes I really like the low perspective that you employed here. I don't know why, but, thanks to your polarizer, I think this really as a peaceful dawn feel to it as well as an evening scene. The wonderful colour contrast between the water, rocks, and sky adds to the feel so nicely. My arthritic knees have been so bad in the past, it has been difficult for me to navigate rocks but my doctors have been administering a new injection that really helps..I can't wait to "Get Down" as the musicians say :-) This is gorgeous, sir :-)