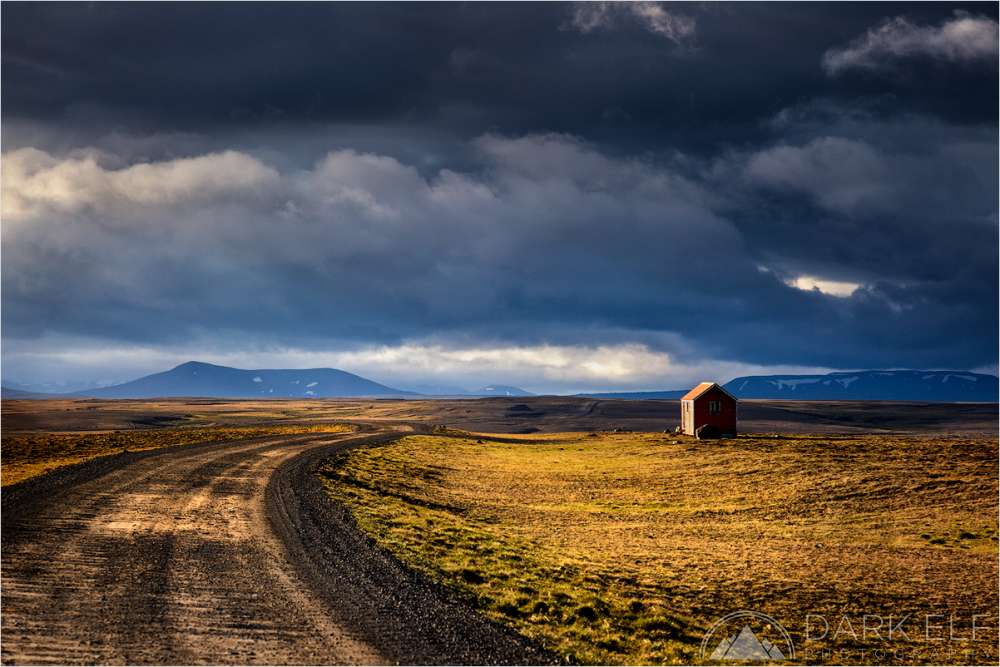 Driving into the Icelandic highlands for the first time ever was a great experience. We deliberately chose a well frequented and "easier" road - Route 35 from the north - just in case we experienced any trouble along the way. You obviously need a vehicle capable of 4WD to access the highlands and we had a sturdy Suzuki Grand Vitara to carry us. It was just right for this kind of a road where there were no ford crossings and where the only major obstacles were pot holes and boulders that could be easily avoided.

The weather was always going to be a challenge and as you can see it was a mix of sunshine and rainy clouds with very strong winds thrown in as well. I read somewhere before hiring a car in Iceland that you need have a strong hold on the car doors as you open them to ensure that the winds do not rip them out of the car. This was definitely the case on that day and sometimes it was almost impossible to open the doors in the first place.

The dirt road was pretty reasonable until reaching Hveravellir - a geothermal area in central highlands - where it deteriorated somewhat and we had to proceed with increased caution.

This photo is from the early part of the journey. The little hut is for the hikers who are looking to make their was through the highlands in foot. Beyond the hut there was nothing until reaching Hveravellir and sometimes it felt like we were the only people on this planet with a vast lava and glacier landscapes our only companions.

The photo shows well the rusticity of the place as you describe it... alone in the world...
Great contrast between this strong sky and the sunny land.

Beautiful lighting and colors of this wild landscape ! excellent composition with the little hut !

This image captures the sweep and isolation and beauty of that area.

Great shot. Such a feeling of vastness.

Stunning landscape with a magical light! You have captured the wild beauty of the place!

@Ehsan Hemmati: Many thanks Ehsan!

Congratulations! This was my favourite!

Great place. And what a beautiful light !

Congratulations on the well deserved Spotlight !

Congrats for this spotlight

what a superb composition with this curve that takes us in the picture.
Light, and colours are so beautiful !
Congratulation on the spotlight!

A MOST impressive and dramatic frame*

Great shot. Congratulations on the Spotlight.

Spectacular! Congratulations on the Spotlight!

Congratulations on your SPOTLIGHT

Absolutely gorgeous! Such a spectacular view. Beautiful light and color! Congratulations on the Spotlight!