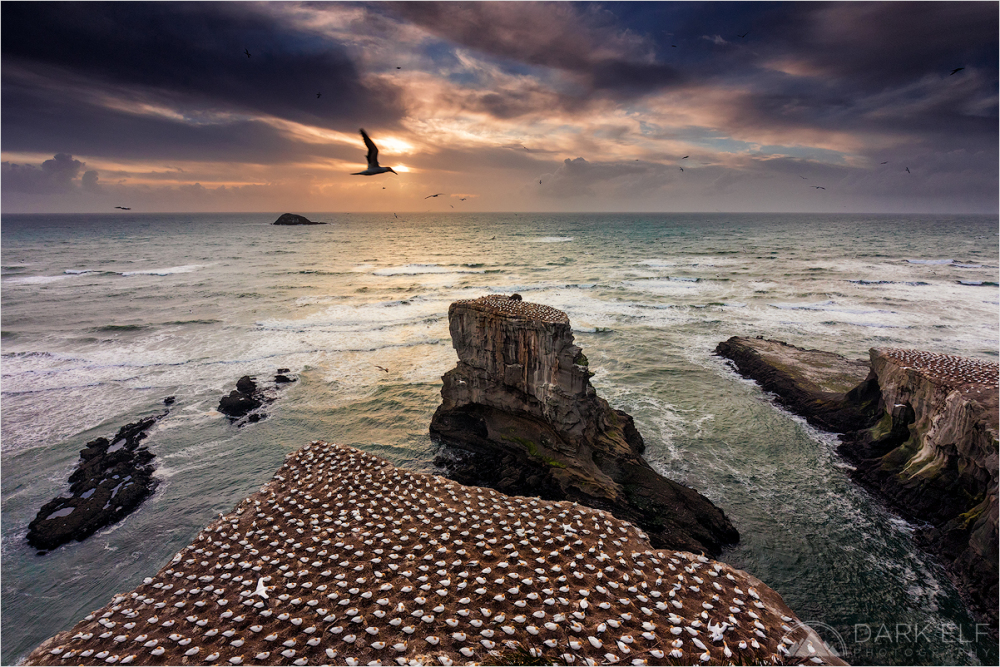 I am still waiting on Adobe to release a lens profile for a new lens that I have acquired before the trip and this is slowing me down in diving into processing of New Zealand photos. I wanted to share something though and one image I picked was taken at the Muriwai gannet colony on the west coast of the North Island just north of Auckland.

Another amazing place on our list of visited spots. The world is just so full of them no matter where one goes. It is breeding season there now and the colony was full of birds, life and activity. There were birds constantly taking off and landing, brining food for their mates and materials to build their nests.

The winds were very strong westerlies and they are the main reason why birds set up their colony there. The strong winds aid them in landing and taking off. Sometimes they just hovered in the wind, many times so close to us that we could almost touch them.

I have a long exposure version of this classic Muriwai scene that I will post later but for this photo I wanted a faster shutter speed to try and catch one of these birds in flight over the cliffs against the clouds. I bumped the ISO up to 1600 as I still wanted a good depth of field at f/11. Luckily I got one of the gannets just in the right spot against the setting sun hiding behind the clouds and the shutter speed was fast enough to give good sharpness to its silhouette.

I recommend viewing the larger version on my Flickr.

Excellent perspective and capture of the bird ! Love all the colony ! each bird as a little white point !

Superb composition! Excellent capture of the bird! Beautiful effect with the birds colony!

What an extraordinary regular pattern the birds make

The gannet fits perfectly up there... I remember well that beautiful place. Great work with light.

I wondered what the white dots were. Then, I realized they are birds! An amazing sight.

@Steve Rice: Many thanks Steve.

Brilliant!!! Like freckled cliffs .......... Flying bird exactly in the right spot and the sky is fantastic!

yo from Ile de France, France

A fine ocean beach shot with a very unusual surface in the foregroud. It is very intersting and well done.

This photograph is amazing, at first I didn't know what all the white dots were on the rocks, I had to read your blog. The nests are so perfectly aligned on the rocks, thank you for sharing this amazing photograph. Looks like a National Geographic cover story.:))

@Linda Candilas: Thank you Linda :-) Hope you are going well.

Stunning photo! I love it!

New lens and new camera... Christmas before time ! ;-)
A new magnificent photo with several interesting points, and we can understand well your process with your explanations.