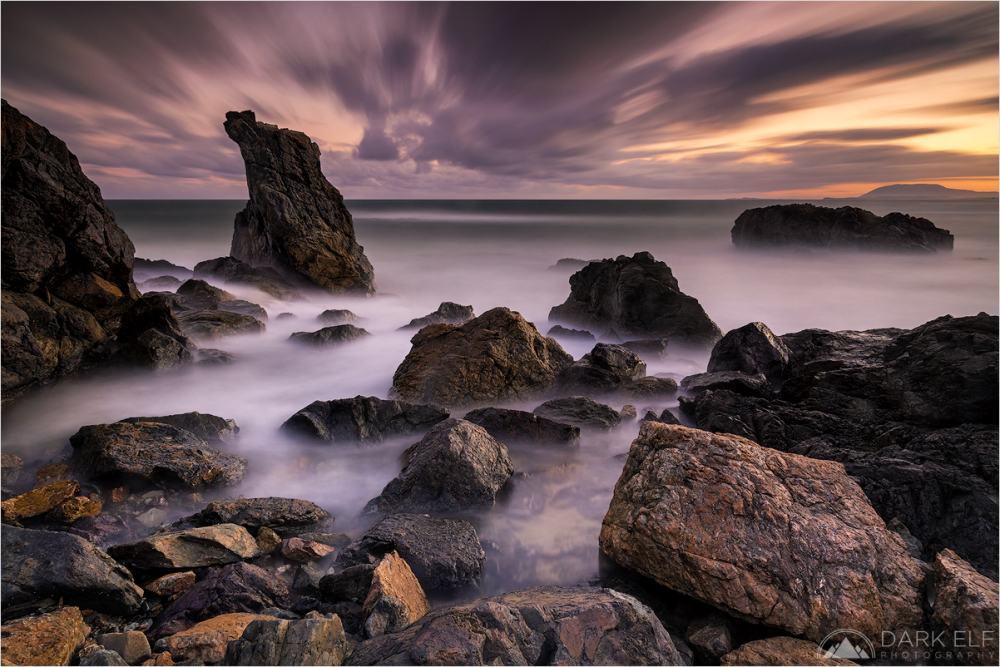 Posted by Darkelf Photography (Perth, Australia) on 23 January 2017 in Landscape & Rural and Portfolio.

Still busy at home - third weekend in a row now but the end is in sight - so I went back through some unpublished images from 2016 and found this long exposure from Port Macquarie in New South Wales. I have previously posted a morning image of the rock in the far left background. This is a wider view from an evening outing just after sunset.

Long exposure photography is my favourite I think. There is always something so appealing to me in the silky smooth water, the exaggerated movement of the clouds captured by time and the overall mood that results from extended shutter times. In fact, it was seeing these kind of photographs on the internet (including Am3) a number of years ago that made me think a lot more seriously about photography and how to achieve similar results.

In this scene, I just missed the setting sun illuminating the rocks with its last rays and once that happened there was not much else going on in the scene. I noticed the clouds moving steadily over the rocks and I also noticed the water working its way in the foreground and that made me consider a long exposure, which resulted in the kind of image I was looking for.

It is always tricky to get the exposure right, especially because in Australia the light fades fairly quickly in the evening and I always need to compensate just a little to ensure that I cover an extra stop or so of light that will fade by the time the camera has finished exposing the image.

I just love that time effect of long exposures, where it is not just one moment being photographed by a whole chunk of time. It makes one realise that the only elements that really stand the test of time are nature's creations such as rocks. Even they crumble as erosion takes its toll but they witness a lot more of history than we do in our lifetime.

Incredible! You have certainly captured it here!!!!

Wow, this yet another of your perfect seascapes! The light is magical, the mist-like haze over the water a strong mystical element.

I feel I can reach the first rock...
Il love the softness of the water and the movement of the clouds, they both contribute to the beauty of this image.

I remember that amazing rock!! Sir, THIS is a wonderful scene! The light and tone and reflections on these nearby rocks are amazing! They really provide a complimentary balance to the image via their presence in the foreground and joined by that wonderful light in the Sky. This Magnificent!!

Excellent work with long exposure. Colours are magic too.