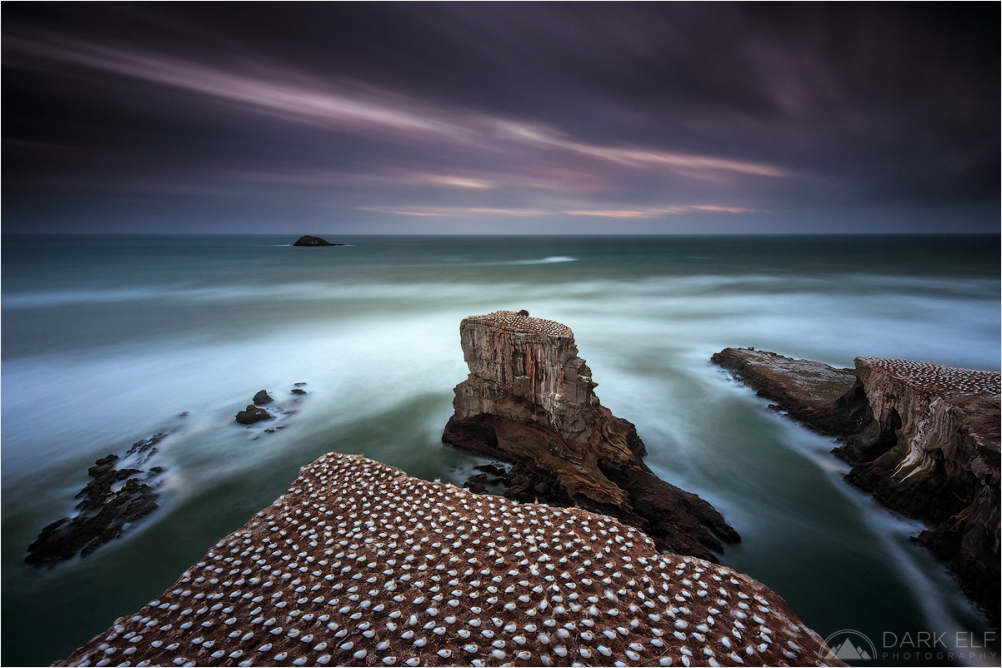 On The Edge of Darkness

Posted by Darkelf Photography (Perth, Australia) on 9 March 2017 in Landscape & Rural and Portfolio.

A follow up to my previous post from the gannet colony at Muriwai Beach in New Zealand that I posted a little while back.

In that photo I chose a fast shutter speed to catch one of the birds in flight against the sun. Here I went with full intention for an ethereal atmosphere and effect. It was taken some time after sunset and with darkness fast approaching it felt like the birds were perched on the precipice of the night. Surprisingly, most of them were steady enough so that their bodies did not become just blurred blobs (although that could have been an interesting effect as well).

Their stillness on the cliffs in contrast with the motion of the water intrigued me, especially when I looked at the photo on my computer screen at home. The scene looked like two different worlds combined - the constant motion of water and clouds against the stoic nature of the rocks and birds. It was just another reminder for me that even though we live in a world of contrasts, they can all still function harmoniously together.

I discover that these white shells are birds...
A stunning result, indeed, and I can imagine your surprise coming back home.
A vey nice effect.

@Dany Kervran: Many thanks Dany

Absolutely amazing scenery and photo! The gannets look just like carpets spread over the flat surface. I also like your thoughts that accompany this image!

An otherwordly experience! Such a beautiful and elegant image. Magnificent work.

@Steve Rice: Many thanks Steve!

An incredible composition with gorgeous colors and clarity!! Your narrative proves it's good not to delete an image until viewing it on your monitor!

@Steven: Thank you Steve. Indeed, it is very useful to review images at home before making a decision to remove them.

Truly astounding! I am speechless! The gannets grace the rock like carefully laid-out decorations onto the surface of the rock. This image just goes to the senses! I Absolutely love it ;-) Bravo, Sir!!

wow this is amazing! it gives me the feeling the world is still beautiful and nature will survive ... forever

@christine: Thank you Christine! I am glad this photo makes you will this way :-)

Wonderful image ! Congratulations on your Spotlight !

Again, I am not surprised! This is a magical photo, Maciek, and a logical choice for the Spotlight !!!

yo from Ile de France, France

It seems the eternity approaches or gets away...
Congratulations.

Congratulations on the Spotlight! This is a spectacular image! The birds look like they were place there. They are so perfectly spaced apart! Gorgeous color!

Congratulation on the well deserved Spotlight ! a fantastic image indeed !

Another stunner. The patterns on the top of the rocks are fascinating. It reminds me of Yayoi Kusama

Congratulations with this Spotlight photo.

Two superb pictures of a fantastic place i'd like to see.
Congratulations for this spotlight

Congratulations on the Spotlight! Very well deserved! This is a spectacular image!

I have run out of superlatives for this one!
An obvious choice for a recognition award! Congrats.

Wow, this is stunning !!

It's really interesting, that with this exposure time gannets waited patiently :) Congratulations!

This is spectacular, the mood, the utter 3 dimensional effect makes for a superb
photo, I feel like I am flying in at slow speed, Congratulations on the spotlight !~

Once again congrats for the spotlight.
You have gave me passion for longs exposures, that's why I did some "folies", I bought ND filters for the next holidays, and I hope I will make beautiful pictures like yours!

@Grandoude: Thank you Grandoude! It is absolutely fantastic that my photos inspired you to experiment further with your photography - good luck and I hope you have a lot of enjoyment out of your new filters :-)

jean pierre a from France

I knew this must have been yours, just by seeing the angle and tones ;) Congrats