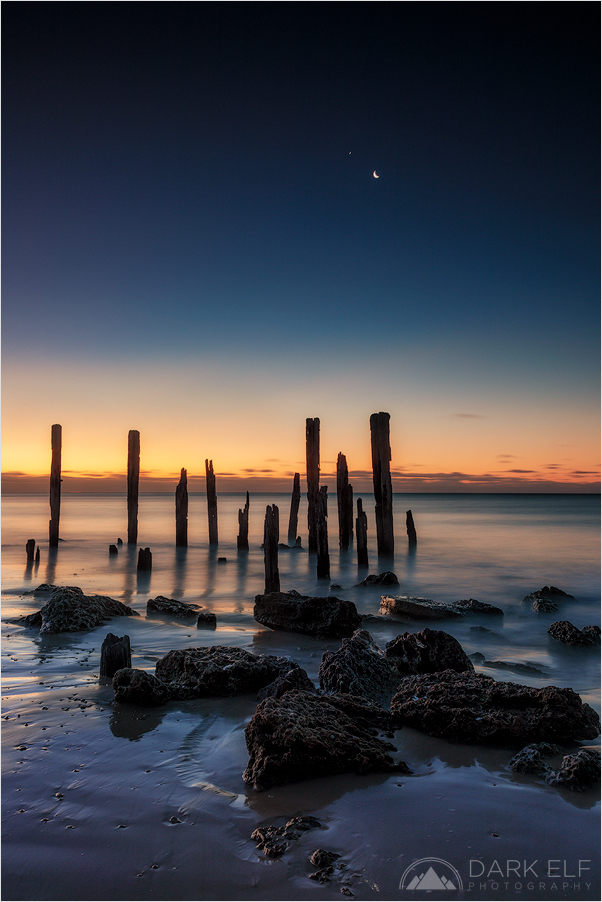 Sunset afterglow illuminates the sky and water around the horizon on an evening at Port Willunga in South Australia in January. You can see the remains of an old merchant jetty in the foreground, as Venus and the Moon hover above the entire scene. The jetty was used in the second half of 19th century by ships carrying grain out of this area. It fell into disrepair in early 1900s and has been deteriorating ever since.

It was an almost cloudless evening and I decided to hang around just a little bit longer after sunset to see if I could photograph something a little different. As it got darker I noticed the crescent Moon appear on the sky with another bright object right next to it, which after some investigation turned out to be the planet Venus. I wanted to use the celestial objects in my composition to offset the foreground. I also wanted to catch of the afterglow remaining over the horizon, as it reflected nicely in the water and contrasted well with the dark pylons.

I have made it a point in my photographic expeditions to never waste a day or night, even if the conditions are not quite what I was looking for. We all hope for epic sunrises and sunsets but they do not always eventuate. However, beautiful light can still be found in more subtle ways, as long as one is open to find it and embrace it.

OOOOh it's so beautiful

Beautiful image with the little moon on the sky.

Excellent composition and capture as usual by you ! I like the remains of old jetty, and the crescent Moon !

Per fect with natural colors

A stunning image! Quite a treat to see.

Splendid colors in a composition that evokes so much tranquility!! Great portrait orientation to capture the earthly and heavenly elements in one shot. It is odd how I find a sense of attractiveness in the deteriorating pilings spotted here.

@Steven: Thanks Steven. I know what you mean about the pillars. I always find them fascinating as well. This stretch of coastline has a number of derelict jetties and I was keen to photograph at least one of them when we were there.

What a wonderful scene ! Staying around served you well....this being a January shot, you may have had Mars up there as well, in addition to Venus ;-) What a compelling and fantastic image here...Beautifully presented sir. ;-)

@Denny Jump Photo: Thanks Dennis. Yes, Mars was out there somewhere nearby as well, it was just not visible as clearly.

Wow, beautiful color. It's my favorite time of the day.

As often, there's much softness in this view and an interest in each part of the image.
I love, too, your explanations about your thought process : e great lesson for us.

Beautiful compo, i like the detail of the crescent moon.

It is such a great combination of warm and cold tones in the sky, and silhouettes in the middle add beautiful contrast.