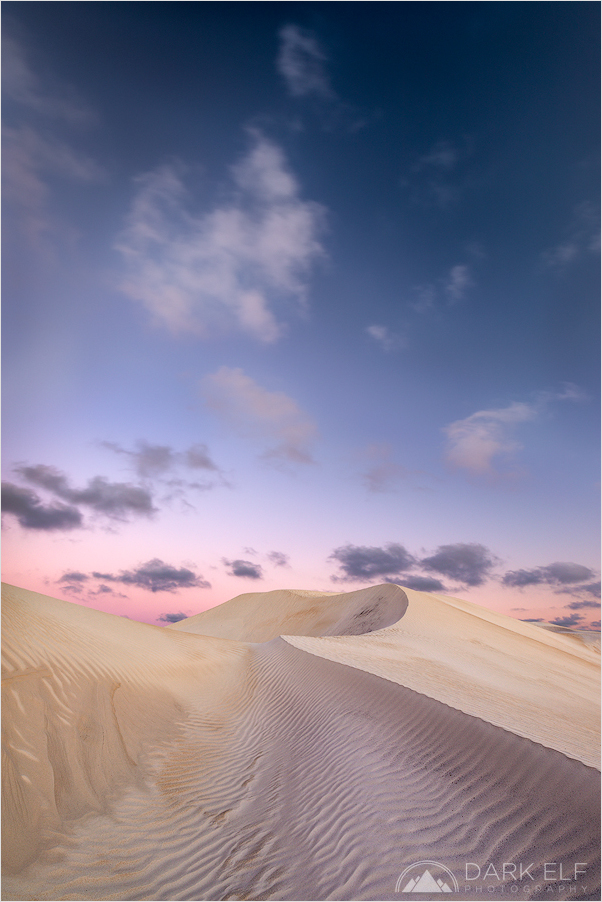 Posted by Darkelf Photography (Perth, Australia) on 29 March 2017 in Landscape & Rural and Portfolio.

This is my most recent work, taken just last Saturday at the beautiful sand dunes near Cervantes in Western Australia. We went out there to shoot some videos and photos for Paulina's music projects and we hanged around until after sunset to see if I could photograph some twilight and night stars images. The dunes are just off the main highway, however, once you make your way in, you find yourself in the middle of sandy desert with dunes stretching as far out as you can see.

I loved the pastel tones that appeared in the sky just after sunset. When I took the first couple of the photos, colours were looking a little bland though. I decided to put on the polarising filter and that definitely brought the colours to life. I still wanted to keep them subtle enough not to overpower the dunes and this resulted in the beautiful mellow effect.

The dunes also change dramatically after the pink and magenta tones appeared. From dull grey tones they went to almost golden warm hues with fine reflections of the pinks and reds mixed in. It was an amazing sight that I experienced for the first time ever. I actually think that the camera picked up these tones even better than I remember them on the day.

The sand patterns and sharp leading lines completed the scene and made for some great compositions that changed every time I moved a few meters. Not many people were around at the time and it meant that the dunes further in were still untouched and no tracks were visible across them. it was perfect for my vision - I wanted to photograph the dunes in as much pristine conditions as possible.

The colours are magnificent, as your describe them ; the form of the dune is very sharp.
And the photo is as a jewel your offer to us...

Excellent angle of view and colors!

Beautiful variety of tones - and patterns, as well.

Incredible colors, such a great shot!

Dunes are cetainly a welcome motiv and worth photographing, but not every photo turns out as magnificently as yours. I especially like the vertical format that allows us to see much of the sky and the clouds as well.

@franz: Thank you Franz. I will have few more photos from the dunes coming up later on.

The simplicity of this composition really emphasizes what appeals to me here; that being the multiple "facets" that the sand dunes have in this shot with their eye-catching ripple patterns and subtle differences in tones!! Great composing and capture!

I totally agree with my pal, Franz!! I especially love how you composed this image in order to display (very beautifully, I would add) the wonderful little ripples here - "center stage." And speaking of center stage, I'll bet Paulina has some great backdrops for images and videos associated with her music ;-) The tones are fantastic Maciek. You really "nailed" this image!! I just love it! ;-)

The colors, tones and textures are superb

Lovely colors and composition. (Jealous… Always want to shoot dunes like this)

Wow! Fantastic capture of the dunes.