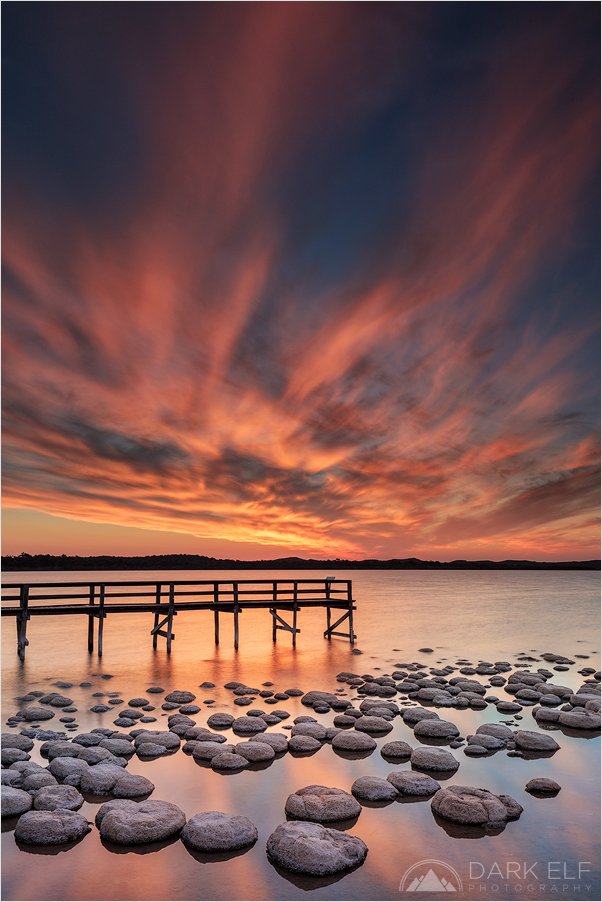 A fiery sunset over the living rock-like structures known as thrombolites that have formed on the edges of Lake Clifton in Western Australia, about 100km south of Perth. We finally managed to get to this location for a sunset after many previous failed attempts.

These round structures are actually living organisms. The thrombolite-building micro-organisms are too small for the human eye to see and resemble the earliest forms of life on Earth.

I was watching the clouds like a hawk for most of the day. They kept changing all the time and it was hard to predict whether we would even get a chance to witness a fiery sunset. As we were driving, I could see this group of clouds just moving into the right area and as we got there out hopes went up immediately.

The sunset was fantastic. I took this photo when the colours were just starting to appear over the sky in their orange hues. The water level in the lake was low enough for the thrombolites to stick out over the surface and together with the walkway they made for a great foreground to lead into the scene.

Magnificent colors. I love the stones.

A beautiful composition with a contrast of extremes............an animated and colorful sky complemented by water so still to provide gorgeous reflections!! Great capture!

This is just stunning! A gorgeous image with the fabulous color in the sky and those spectacular thrombolites. I have never heard of or seen them before but they are so interesting. It made a magnificent image! 5*****

Absolutely fantastic image, from the top to the bottom.
I love the "Japanese" foreground...

a lovely contrast between the static and the dynamic

Terrific presentation!
I like the harmony this image exhales despite the very different 'textures'! The flaming sky is in a category of its own ...

@franz: Many thanks Franz! Iceland coming up soon ;-)

Absolutely brilliant, Maciek! The colors are tremendous, and I love the positioning...What a wonderful thing it would be to stand here and just sink it in! Hope all is well for you ;-)

Stu from From Scotland | Living in Kyoto, Japan

Lovely sky on the Rock Family.
I see you have bought the last 5D, nice choice ;)
Beautfull focus to come!

@Grandoude: Thanks :-) Indeed I have moved to 5DIV last year and I am very happy with the camera. The shadow noise is almost no existent - it is a pleasure to work with in the field and to process the photos later.

Love the rock like things here and the wonderful hue in the sky !!!!!!

Stunning photo! Excellent composition. Wonderful to see the thrombolites in such a gorgeous setting.

Oh man, how come this didn't get a Spotlight?