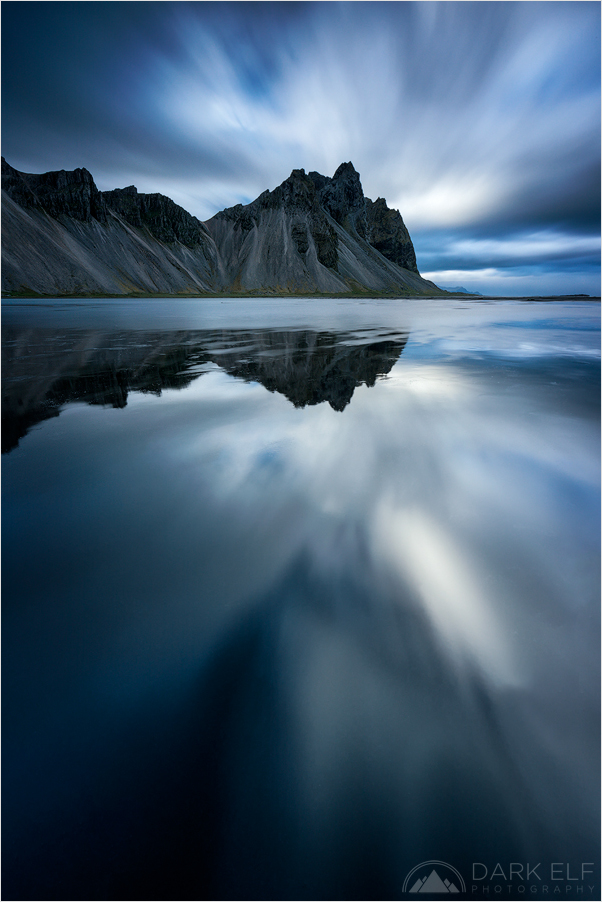 After a failed attempt in 2015, when Vesturhorn mountain was all covered in clouds and fog, we were able to see and photograph this spot during our trip in June. I was actually surprised how quiet it was around midnight with not many other people around to enjoy the bright nights and reasonable conditions, although it was a bit windy.

It was because of the wind that I went for long exposures on the first night we spent around Stokksnes - this is what the headland near the mountain is called. I was hoping to get a still reflection but that was very difficult to achieve. Strong gusts kept disturbing the water and few times I had to turn away because of the sand that was flying my way.

I did manage to catch some nice reflections of the moving clouds in the foreground though, and I think they lead in quite well towards the mountain. This influenced the composition where I decided to place Vesturhorn higher in the frame to take advantage of the clouds movement taking the eye towards the horizon.

I understand that the mountain is covered by clouds more often than not and that made a chance to see it even more rewarding. This is also the reason for the title - 'Cloudcatcher".

On a side note, if you ever plan to visit this area, you have to pay for entry to Stokksnes at the Viking cafe during the opening hours. The farmer who owns the local land is rather touchy about people not paying the entry fee. He even drove out once after midnight and checked that I paid before driving off again. I have heard stories of people being chased away by him previously.

Superb! (No other words seem to fit!)

Stunning composition with a great sense of motion captured here!!

Absolutely stunning and great choice made in the composing. Love the story about the farmer :-)

@Curly: Cheers Curly! The farmer is a menace (apparently). I have heard stories of him threatening people with a knife, but I do not know how true they are.

Stunning. This would make a wonderful gallery print.

Beautiful compo, reflection and effect on the clouds.

Wow!!! This is stunning!

Wow, this is gorgeous!

What a spectacular photo!

This is absolurely sensational, Maciek! I am so moved by this special appearance you were able to achieve in the water and sky (the motion) here. This is absolutely mesmerising! Thank you for this wonderful piece!

@Denny Jump: Cheers Dennis! I was working on a slightly different composition to encompass the whole mountain and then I saw the reflection of the clouds right at my feet :-)

This is just stunning! The long exposure of the clouds behind the mountain is just magnificent. I love how you captured the movement. Gorgeous reflection. 5*****

A superb reflection shot. This is the finest picture I've looked at today.

So peaceful!
The reflection is awesome!

This image has been featured in 5 Remix collections.