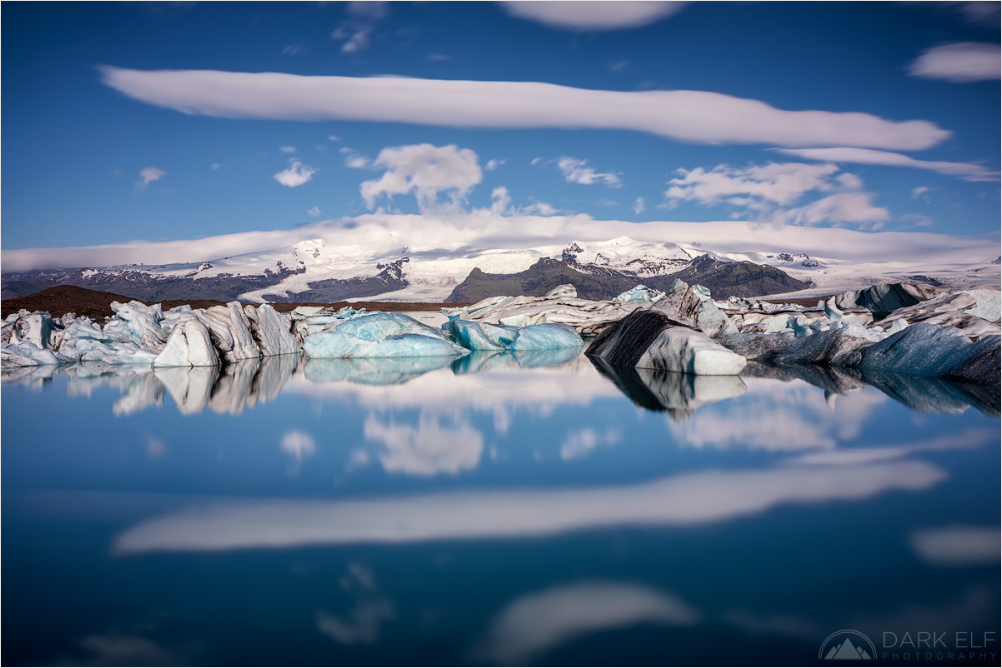 Jokulsarlon looks beautiful almost no matter what time of the day or night it is. The moments I liked best were the calm times between the tides, if one was lucky for the wind to die down. This is when the water and icebergs were at their most still and silent. You could only here the loud crunch of icebergs melting down and separating or when a new sheet of ice broke off the glacier face. It was a kind of anticipation game to predict and spot where the next break would happen.

We all know that the golden hours of the day are magical and this is the time when most landscape photographers are out and about. I did like the daylight hours in Iceland as well, tough. On a day like this one, you would get the most pristine clean air, light and tones, especially the wonderful blue sky and its reflection if you were near a body of water.

With almost all of the previous day written off due to persistent rain, it was great to head out again in beautiful sunshine and Jokulsarlon did not disappoint. More icebergs arrived in the lagoon overnight and tides were just shifting as we arrived, which allowed for clear reflections in the cold water. The clouds also provided an interesting element for added symmetry and balance with the long cloud hovering over the mountains and framing the main scene.

This is so calm and the blues are lovely!

Marvelous! This is pure magic.

This is just gorgeous. The blue color of the thick ice and the reflections are magical. I cannot imagine what it would be like to stand there in silence and hear the icebergs crunching together. I have always wanted to visit Iceland but I hear that a lot of walking is involved which would be difficult for me. 5*****

@Elaine Hancock: Than you Elaine. There are a lot of wonderful places in Iceland that are very easily accessible just off the main highway - Route 1. Most of them do not require much walking at all and this is what also makes Iceland so popular. Jokulsarlon is one such place. All you need to do is to just step out of the car and you can enjoy its beauty.

A very beautiful beautiful gallery.
I had a nice time watching these shots.
Have a good day