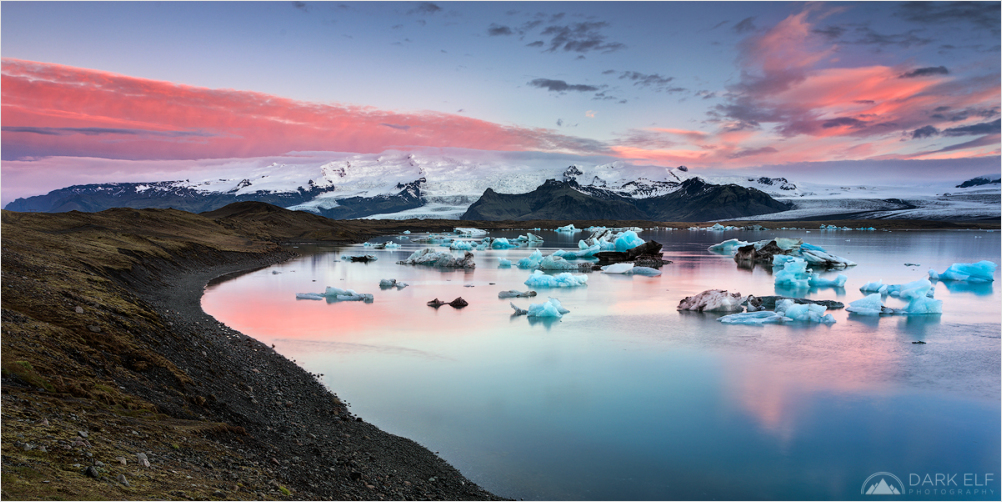 Staying in Jokulsarlon for this photo. During our trip in 2015 we drove clockwise around Iceland. This time we did it the other way and Jokulsarlon was our first stop. We wanted to go back there a lot and knowing that it would be our first destination out of Reykjavik, we could not wait to get there.

I took this photo during an extended outing over a long, long sunrise at the lagoon. It was around 3.30am when the sun managed to illuminate the clouds. The sunrise lasted near an eternity with the low soft light lingering well into the day. Surprisingly not many people were around at all.

The icebergs were pushed back into the lagoon and I needed to walk around a bit to find a good angle for the composition. I wanted the edge of the lagoon to frame the water and lead towards the mountains. I wanted to obviously have some icebergs in the frame and also to catch some of the illuminated clouds. This was the tricky part as they kept on drifting away to the left, always just teasing me a bit.

The colours did not last for very long but still I think this was the best sunrise of the trip. We were really against it for the entire journey with the nights being mostly very cloudy or on rare occasions with no clouds at all. We just could not get that one or two nights with absolutely epic light so I worked with what I had instead. These days I am not discouraged by the lack of conditions that I was hoping for and try to find something interesting regardless.

Wonderful capture of lights and landscape! I love Iceland!

I love this image at first sight. The edge of the lagoon caught my eye right after the clouds and reflections. It's perfect framing device. Everything here is just gorgeous.

shots make me want to go..!

Jokulsarlon, a dream place.
I dream to return in this wonderful country.
The first time, I was a beginner with my camera. Now, I have lot of ideas to increase my pictures!

@Grandoude: It is a beautiful place indeed!