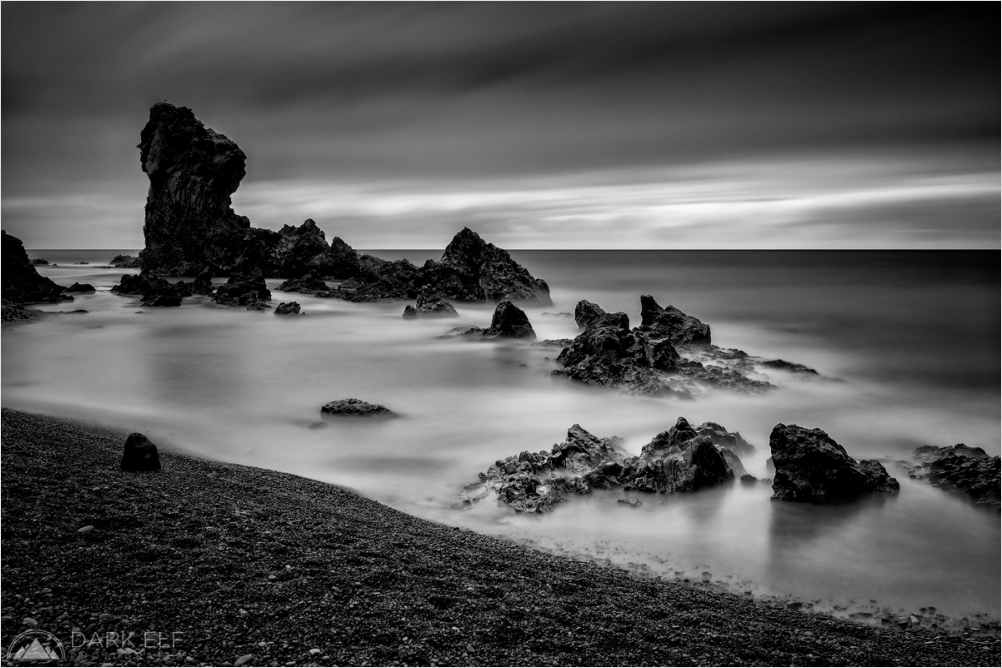 Djupalonssandur is a wonderful small pebbled beach, with a series of rocks of various forms emerging from the ocean. It can be found on the south western side of Snaefellsnes Peninsula in Iceland.

I was particularly interested by the rock formations and the sea stacks. They immediately provided great elements for my composition. With the weather being overcast and rather grey, I decided to shoot some long exposures, hoping to blur out the clouds and water moving between the rocks.

The tide was lowish but I still had to watch out for sneaky waves, which can be very dangerous in this location. It was windy and every now and again showers threatened to move in right over me. I was forced to abandon a couple of exposures right in the middle because of the weather, however it managed to stay clear enough for one of them to go through all the way.

I had to wipe the filter once during the time that was required to take this photo. With long exposures though, you can get away with quickly wiping the lens if you are very swift and careful. No trace of it remained when the exposure was completed.

Shooting long exposures can be very rewarding and also very frustrating. When you get the setup right, results are spectacular. However, if you get it wrong or if the conditions change rapidly during the exposure, you have possibly used up a fair amount of shooting time for the exposure and for noise reduction frame to complete. This can often add up to between 10 to 15 minutes for a single frame. This is why extra planning and tests are needed to ensure that you make the most of the moment. I have often found that if I missed the first attempt, the conditions and light were completely different afterwards and not always suitable for the original vision.

Beautiful composition and long exposure in B&W ! I am still interested to know how you manage your shooting with the weather conditions !

@Anna Cherer: Hello Anna. I always test the light before taking a long exposure. I take few shorter exposures at higher ISO like 1600 or 3200 and then work my way backwards to ISO 100 while working out the long exposure time. If light changes suddenly during the extended exposure, there is not much you can do other than cut it short and try again. If it rains or tripod moves then usually you have to start again as well. During dusk and dawn hours I factor in whether it is getting darker and brighter and adjust the exposure time accordingly. This is an intuitive process based on previous experience. It is also a good idea to test the strength of your ND filter. I have a Lee Big Stopper which is meant to have 10 stops of density. Early on I just could not get my exposures right at all - they were always too dark. When I tested the filter, it turned out to be 12 stops. Since then my results are much more even. Most importantly, you just have to be out there to practice and build up your experience with long exposures in various conditions :-)

What looks like could be a rugged terrain you have turned into a tranquil oasis!! Thanks for the "wiping the lens" idea.

@Steven: Thanks Steven. At four minutes of exposure, if you wipe your lens gently and quickly without disturbing the tripod, you can get away with it once or twice during the exposure time. But you have to be very careful and it works only for minor rain drops and water spray.

A gorgeous long exposure image. Looks like you got everything spot on.

Great shot with the big ND stopper. I love the black inkiness of it all.

This is just beautiful! The water around the rock formations is just magical. I love the light in the distance. The pebbles on the beach look like they are black in color. A fabulous image! 5*

I really love the long exposure.

These ghost-like rocks are stunning in the dreamy water! So beautiful!!!

A wonderful exposure has created an impressive sea picture with artistic looking fog. A great shot.

So many words of thanks are owed here...Thanks for the fantastic piece of beauty, here, that you have shared with us - and Thanks for the inspiring words of caution and instruction as well.....I am so grateful for this post in many ways...and finally, emotionally I feel a calm in this view...so beautiful! Thanks so much, sir ;-)

@Denny Jump: Many thanks Dennis!

Great rock monsters are found there... The contrast between them and a "calmed" sea is beautiful here.