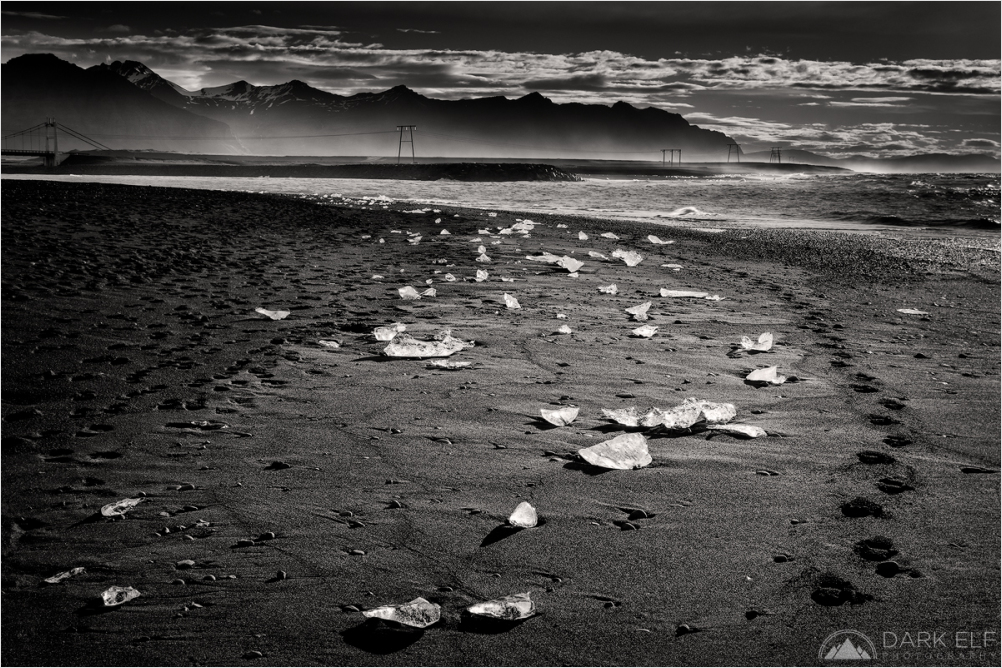 Staying with monochrome theme for now. It was really that kind of a trip for us. No epic colours during the long sunsets and sunrises. Not to worry - I had other ideas to keep me going :-)

We are back at the Diamond Beach or Jokulsarlon Ice Beach. I did not venture out too many times to the beach near the lagoon because for most of the time there were not too many icebergs resting on the black sand. They started gathering again just as we were moving on further.

I did go out there one of the mornings after spending most of the night at the lagoon. I was just walking along the beach, looking for any interesting icebergs, when I turned around and saw my footprints encircling a group of smaller diamonds that managed to make it ashore. I thought that I could use them as a good sweeping leading line in the composition to take the viewer through the scene and towards the water and mountains.

The gentle mist rising just below the mountains at the top completed the scene for me and I took some photos with a vision to process them in monochrome later. I gave the scene just a light touch of sepia tone as I think that it fitted with the morning mood and the warm sunlight that was staring to come through behind the clouds.

Another one of my favourite places in Iceland, but then again which one is not?!

A beautiful composition and perspective with your footprints and small icebergs diamonds which guide our look far off ! beautiful B&W too, I like it so much !

@Anna Cherer: Many thanks Anna. I appreciate your comments :-)

such beautiful composition, perspective, lights & atmosphere!
A M A Z I N G !!!!!

Your photos always take me to another world!! It's interesting to see these large "diamonds" in the sand. I love how the shoreline wraps around in back. It makes a great leading edge.

A brilliant idea and gorgeous result.

I like your picture, nice framing, I especially like the opposition between the first and the background

I love your text here...Actually, I love your text everywhere! ;-0 But this is so full of dreamlike visions....Beautifully composed (as always) and projected....Thank you, sir!