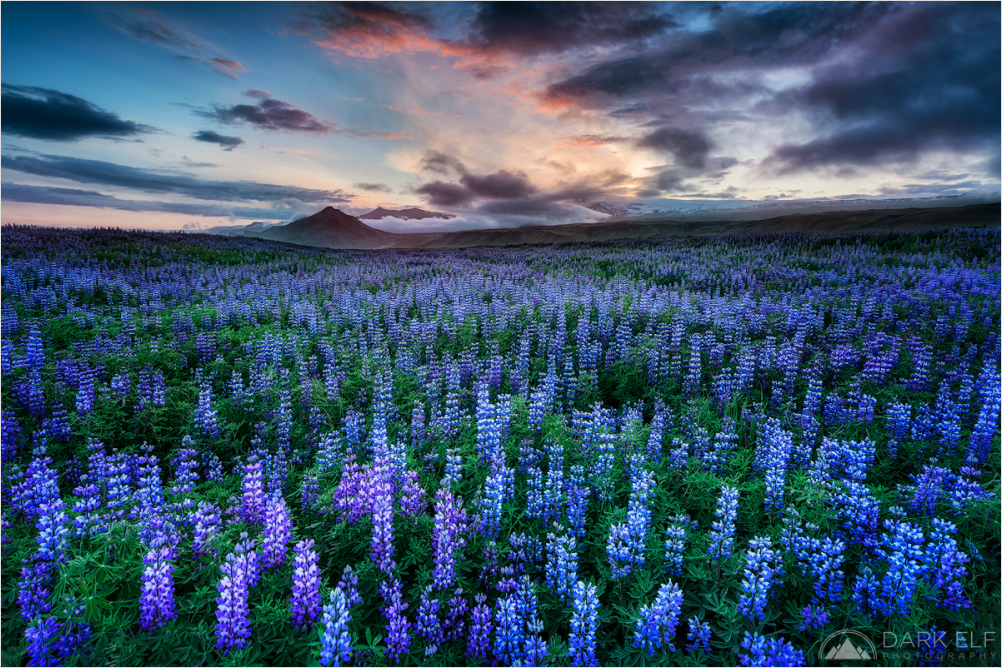 Posted by Darkelf Photography (Perth, Australia) on 28 August 2017 in Landscape & Rural and Portfolio.

South coast of Iceland is covered with lupines in June and July. Fields stretch along the main highway for kilometres and often it felt like they were never ending. We passed this spot near Skogafoss on our way through to Vik. Later in the evening we returned to the area hoping to photograph the waterfall but in the end settled in the middle of the sea of lupines and enjoyed a photo session with flowers all around us.

It was another night where the light was teasing us with a possibility of some epic colours but more and more clouds kept on drifting in from over the glacier that you might just be able to see over the horizon. I got accustomed to these situations a lot during our last trip to Iceland - the original plans did not work out and I had to come up with a backup plan to make the most of the conditions.

Mind you, when you have a field of these beautiful flowers around you and also know that the blue hour will last a lot longer than just an hour, it is easy to some up with alternative plans. So I just immersed myself with the lupines and looked for various compositions in every direction. My main decision was what background to have for the flowers and I was looking for interesting clouds or a bit of colour in the sky to compliment the foreground.

The other main considerations were the shutter speed and timing of the capture. There was a gentle wind weaving its way through the field and there was not a moment when everything was perfectly still. I was shooting bracketed exposures to later blend in together and had to pick a moment when the foreground seemed at its most still. I did not mind some of the flowers to be blurry but I wanted most of them to remain steady and also wanted maximum depth across the entire field.

I enjoyed how the overall blue tonality of the night matched the colours in the field. It felt like everything was in perfect harmony and I hope that I was able to convey some of that mood through this photo.

Amazing field covered with flowers ! I do appreciate the delicate harmony of blue tonality between the sky and lupins, and the great perspective and depth of field !

marvellous display and makes for a lovely colour palette

Amazing shot. And thank you for sharing the circumstances of this capture.

This is just stunning! The flowers go as far as the eye can see. The color is just gorgeous! I am glad that your plans changed and focused on this magnificent vista. It is breathtaking! 5*

@Elaine Hancock: Many thanks Elaine!

This is so very wonderful, Maciek!!1 I love Lipine because they have that effect of appearing to be moving when they really are not. I think it's the arrangement of the petals on the setm...very mathematical...like a blurry vision eye test that really isn't blurry ;-)

This is spectacular....My best wishes to you and Paulina!

@Denny Jump: Cheers Dennis. All the best to you and Barbara as well :-)

Congratulations on the Spotlight! This is just such a magnificent image!

Congratulations on your new Spotlight !

Excellent! Amazing composition, colors and light! Congratulations on the Spotlight!

At one second it's an absolute cracker, up there with the Don Smiths et al :-)
Many congratulations!

@Curly: Cheers Curly! I appreciate it a lot :-)

Absolutely crazy field... And a beautiful sky, too. Congratulations!

now that is a field of lupine!

Saw this stolen and used by someone on Instagram today.....oh well, at least you know it is still having impact around the world.

@Curly: Interesting. Thanks for letting me know.

Who! grandiose this wave of flowers and the horizon makes dream... Bravo

@Anita B.: Thank you Anita!

@Colin at Eyeconic: Many thanks Colin!

a flutter of wings by Jaya