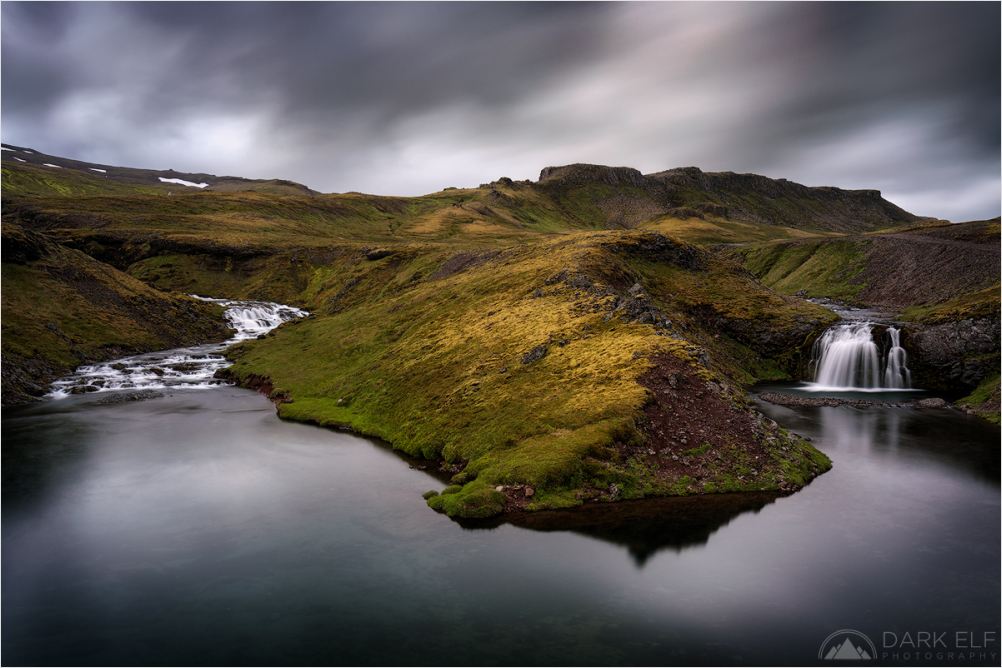 This was a scene along route F570 on Snaefellsnes Peninsula in Iceland that I knew I just had to photograph as soon as it came into my view. The twin waterfalls, the brightly coloured ridge separating them, the quietness and the movement of the clouds all appealed to me instantly. It was also the kind of scene that in my mind had to be done in a long exposure. The smoothness of the water and the clouds just fitted with the mood perfectly on the day. Another aspect of this composition that I liked is the balance between the two falls. Combined with the ridge they almost look like well balanced set of scales.

The road was only opened a day or two earlier as a lot of snow and icy conditions still prevailed in the upper parts. This route takes you right past the glacier - Snaefellsjokul - and it was an interesting experience driving between walls of snow and through broken ice and tonnes of mud. I could not take too many photos as we drove further because the glacier was covered in clouds and visibility was very poor.

Extra care was required while driving as there were still trucks clearing parts of the road and it was not easy to see cars coming from opposite direction. At least a couple of times we had to reverse out into a clearing to allow other vehicles to pass through the narrow path between snow. That made us even happier that we stopped by this view earlier on and took time to enjoy and photograph it.

A lot of people complain about how there is nothing new to discover in this world and that everyone has been in all places before. To me it is about our own private little discoveries of places that we have not seen previously (and sometimes about re-discovering places that we have already seen). If we look at the world in that way we realise how much there is to see and experience. The proof is in the photos that people post everyday. There is always something new that I see to stir my interest and to start exploring travel possibilities.

A lot of softness
A very beautiful picture

Amazing scene! I love the view with two waterfalls and a separating ridge.
One famous Estonian biologist, nature writer and photographer Fred Jüssi said that "to see something new, one should walk on old paths." I totally agree (although I like new paths, too :-)).

Exquisite image! You had quite an adventure on this outing.

Just so instantly knew this was an Icelandic scape lol.

@Curly: I know what you mean. These days I can spot a photo from Iceland from a mile away ;-)

I am sure this has to be a Spotlight. Magnificent scene.

This is just spectacular! A gorgeous view of both of these waterfalls. I love the green, the light on the water and the beautiful clouds. I really liked your narrative. For the time being, I am stuck in my back yard taking pictures and I can find something new almost every day. You just have to look. My son was there last summer. He said then that the roads were difficult to navigate at times. I can't imagine what it must have been like with the snow.

@Elaine Hancock: Thank you Elaine! There are many new things that can be found in one's back yard. One day I should explore mine a bit more and photograph some of the insects that hide in our plants :-)

A beautiful place and composition with the two waterfalls ! superb lighting and long exposure !
I agree with you, I always find something new to photograph in my city or around, and in the places where I go most of the time. It is enough to know how to look !

That is a fantastic view, well shot.

A very impressive landscape of these dual falls. Excellent capture of the land colors.

Truly wonderful post here, Maciek! While reading your wonderful text, I would stop and think about what you were saying! The vision in front of me just fit so beautifully with the story you tell. As for finding nee things, I completely agree. I very often go to old familiar places and I rarely have trouble finding something different to concentrate on. But, I must say, the combination of masterful images and compelling words that your posts always take me on a new and pleasant journey. Beautiful!!! Cheers! ;-)

@Denny Jump: Many thanks Dennis. Great to hear your thoughts on this as well :-)