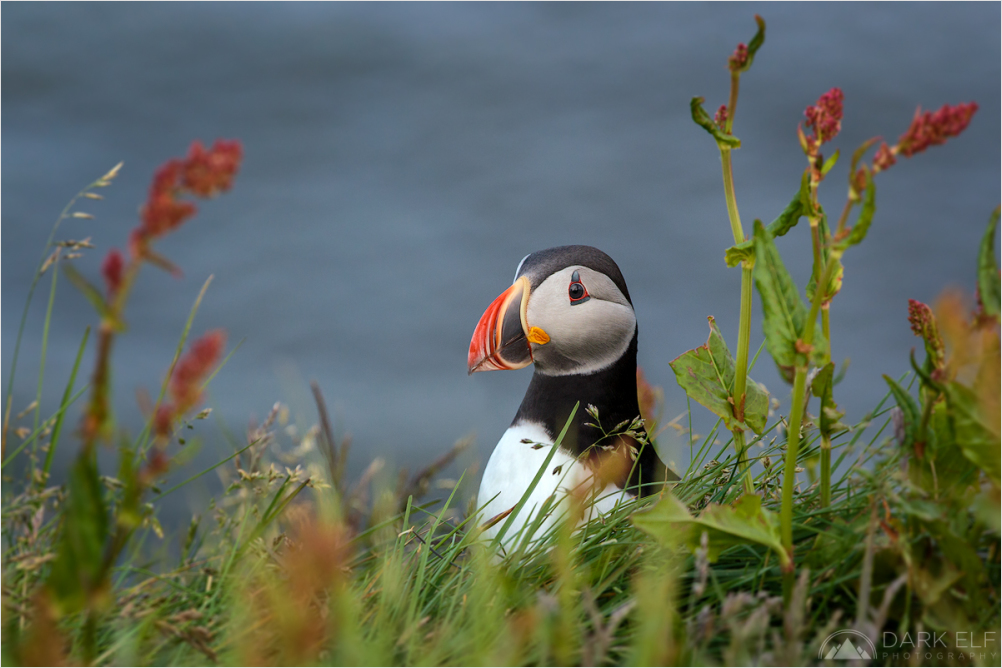 Posted by Darkelf Photography (Perth, Australia) on 12 September 2017 in Animal & Insect and Portfolio.

Visiting Iceland in early summer presented us with an opportunity to look for puffins in a couple of locations along the way. We did not see them until the last few days of the trip but it was worth the wait. We finally got a good look at them next to the Dyrhólaey arch and cliffs near the town of Vik on the south coast.

We spent two days exploring the towering cliffs of Dyrhólaey and Reynisfjall before finding a larger colony. Because we were looking for puffins mostly in touristy areas, it was hard to get anywhere close to them. They were usually at least 15-20 metres away and it required a bit of patience to spot one closer to us. If one is looking specifically to photograph puffins, I would recommend going earlier before the main tourist season begins and explore more remote places such as Latrabjarg cliffs in Westfjords.

The puffin in this photo was reasonably close to us. I almost missed it because it was hiding in rather tall grass. I could just see it when I stood on my toes and it took a combined effort between me and Paulina to get the shot. I set up the camera and gave it to Paulina so that she could sneak in just a little closer where the view of the bird was a bit less obscured. Luckily the puffin stayed there long enough for few photos to be taken.

They are just beautiful in real life but I think even more so when photographed. They look almost like fluffy toys glued into the scene. They were one of our main reasons for visiting Iceland in June and we were very thrilled and happy that we were able to see them out in the wild.

It is a truly magnificent and amazing bird. In these high grasses, the catch is beautiful.

Gorgeous clear shot!
Oh lucky, lucky you. I would LOVE to see a puffin at close proximity. I have missed them in Iceland, France and Ireland! Maybe one day ....

Great shot. I am just about to paint my woodcarving of a puffin, and I will certainly be looking at your picture for reference. Thank you.

Years ago I spend a month in Alaska, and didn't get even on good photo of a puffin. Great shot.

@B. Thomas: Thanks Barbara

5 stars from me Magnificent!

Wow, nice portrait, its like posing for you. You got a great model there.

A magical image of this fantastic bird. I like the way the red flowers echo its beak's color and shape a little.

Beautiful portrait of that little fellow, framed with colourful plants. Although searching on several Nordic islands I still haven't a puffin's photo - so I'm a bit jealous, too :)

@Vaido: Thanks Vaido. You have taken photographs of plenty of animals that I have not seen in the wild yet :-) I am sure a puffin will come along sooner or later ;-)

Oh this is just a fantastic image, Maciek. The light is great and the setting is really superb with a really wonderful feel of in the wild. This is just wonderful!! ;-)

This is just adorable. The expression that I perceive from his features is so sweet and innocent. They are a creation of such fun.

Oh, how lovely! You were lucky to have this cute fellow pose for you, and you made the best of it. A perfect portrait of this charming symbol of Iceland!