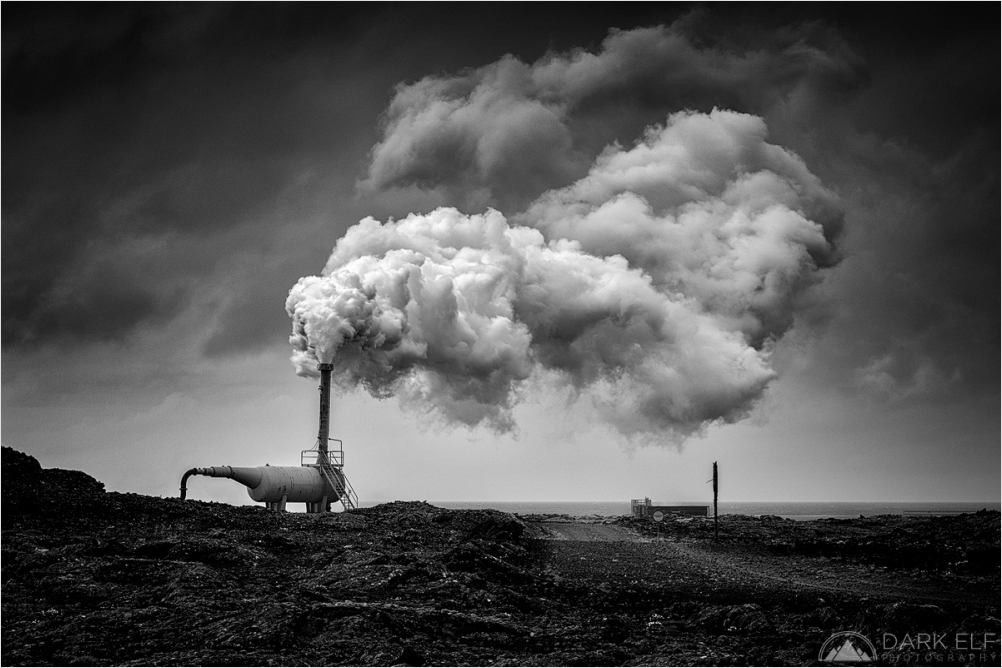 Iceland energy supply is almost entirely generated through renewable sources such as geothermal power and hydro power. There are many places where one can see big geothermal plants with steam belching out of the ground and various machinery.

The Reykjanes Power Station is a geothermal power station located on the south western end of the Reykjanes Peninsula. The plant generates electric energy using steam and brine from a reservoir at 290 to 320 °C.

Combined with the lunar like lava landscape surrounding the plant, steam vents can make for interesting photographic subjects. We spotted this one as we were driving by and I was originally hoping to do a long exposure here, however, the conditions were very windy and rainy so I only managed to get a couple of quick shots with a view for a black and white conversion.

What interested me in this scene was the minimalist feel of the landscape with very few elements to keep the attention mainly on the vent and the thick steam cloud belching out above.

The huge cloud of steam makes it look the opposite of the ecologically sound technology it is :)

@grouser: I know what you mean. Luckily in this case it is all about good energy :-)

Quite dramatic and beautiful!

A spectacular image. The steam against the dark sky has such an ominous gritty feel to it. The black and white really accentuates the detail of the steam. I love it! 5*

This is fantastic! I knew what this wad instantly as I worked in the power industry and have always been most partial to geothermal power as it is so clean and economical. I love to see the steam bellowing out of the vent pipe and it almost resembles a prehistoric creature belching forth the steam ;-) The B&W procesding Really adds a realist tone indeed. This is such a cool shot!! Thank you Maciek!

This mix of steam and clouds works well here.

Magnificent capture of the forces of nature capture for man's purposes! Again, the monochrome treatment 'makes' the atmosphere in this image!