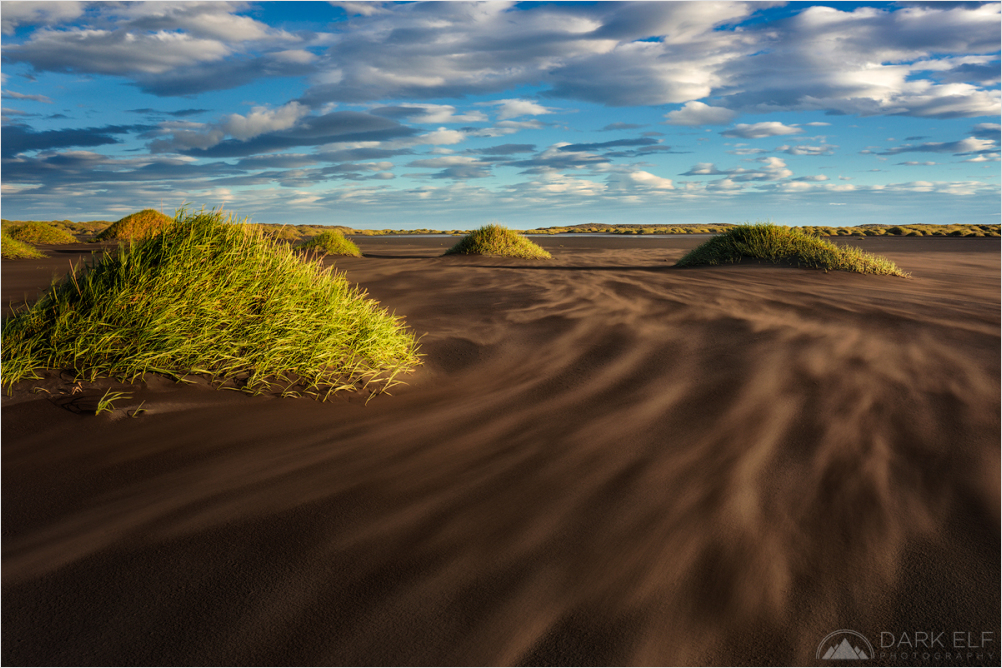 Going back to Stokksnes today, on the south coast of of Iceland. When we went to explore the area before the night shoot, we found these sparsely situated dunes on the western side of the causeway that links the mainland with the lighthouse and the headland. We immediately decided to take some travel snaps of ourselves amongst the dunes.

As I was setting up the tripod and timer to take a photo, I noticed that as the wind gusts picked up, they created a great effect of the sand moving all around us. I made a quick decision to turn the camera in a different direction and try to catch that swift motion of the sand. My options were limited, as the wind gusts were unpredictable and of various strength, while the sunlight was moving away from the dunes rapidly. I only had an opportunity to fire a couple of shots before the foreground got too dark.

I had one exposure at 1/10 sec and another one at 1 sec. I went with the 1/10 sec in the end as the movement was fast enough to create a soft blur effect and the sun illuminated the moving sand beautifully, giving it a wispy ghost like quality. The one second exposure had lovely smoother blur but the light was already gone and it looked too dark in the end. I thought that the vibrant greens and blues looked wonderful as well and clouds also added a bit of texture in the sky.

Standing in between the moving sand was fantastic (as long as it did not get in our eyes). It felt like we were sailing right through it and the motion effect was almost unbelievable. This photo was an unexpected bonus and luckily I was just quick enough to be able to take advantage of the opportunity that nature presented before our eyes.

Excellent! Superb capture of the movement of the wind of sand! Great composition, light and colors!

Photography at its best - an exceptionally fine image.

Wow, this is gorgeous! The blowing sand is wonderful.

Stunning capture of the movement here! The contrasted colours are fantastic too!*****

So professional, and beautifully observed. Utterly stunning with such vibrancy and detail.

This blur effect on the sand is wonderful!

My sand moving has been successfully described. The whole thing is improving it ,. that the grass of the shells is quite sharp in it. Great picture, really.

Striking colours and a mesmerising effect of the drifting sand ...