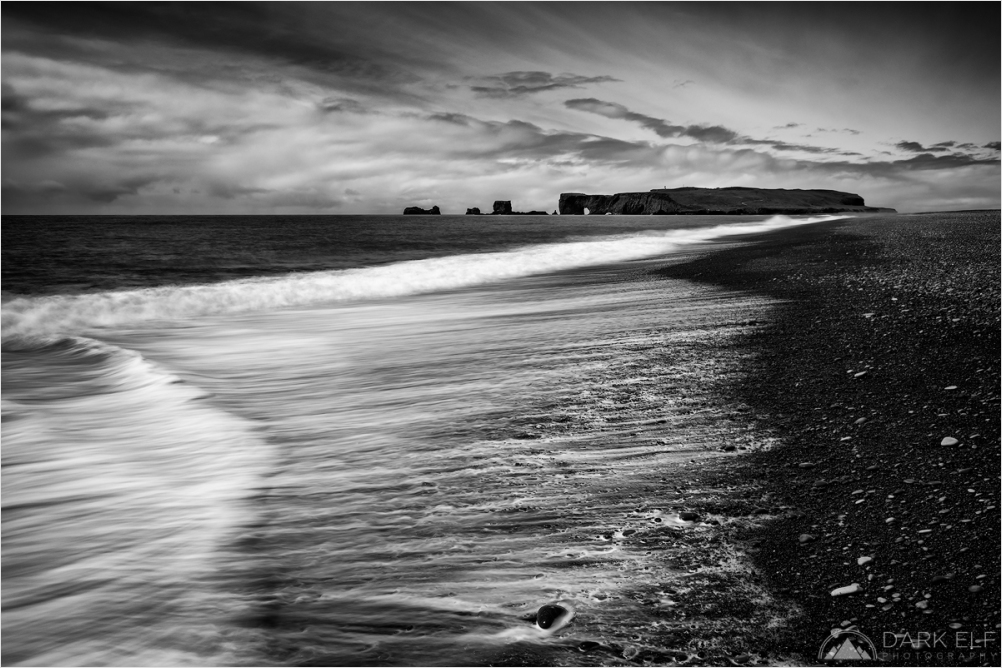 Reynisfjara - the black beach near the town of Vik in southern Iceland has fascinated me since the first time we saw it a couple of year ago. I loved the natural contrast between the black sand/pebbles and the white waves rushing in towards the shore. That always made for a great potential for some black and white photos. There is also something so mysterious about the dark shores in Iceland. I am used to the pristine beauty of white sand in Western Australia. This was just a different darker kind of beauty.

The conditions were just right when we arrived at Reynisfjara. There was a good cloud cover and it gave me a great backdrop to set the Dyrholaey cliffs against in the distance. I used the shore and the incoming wave to create leading lines towards the cliffs and they joined together nicely just at the edge of the rocks. I also wanted to photograph the right motion of water for the foreground. It was just a matter of waiting for a wave to reach far enough to create the kind of streaks that I envisioned.

It helped that the countless busloads of fellow tourists were pre-occupied with the Reynisdrangar sea stacks in the opposite direction and absolutely no one ventured out towards the western side of the beach. That was another amazing contrast. On one side there were hundreds of people admiring the majestic rocks, noise, cars and general mayhem, and on the other it was total peace and quiet. We felt a world and a half away.

such beautiful composition, perspective & atmosphere!
A M A Z I N G !

Such a lovely image. You went the right way.

What a wonderful story and absolutely compelling image, sir. I feel sorry for the poor, sad bus loads of tourists but rejoice in your brilliant decisions;-) Beautiful, sir!!

The long exposure here really accentuates the contrast between the water and the black beach! Beautifully composed with a nice sense of motion as well. I love your story about enjoying the peaceful side and away from the tourists, which was good for your shoot.

What a fantastic place and what a fantastic rendition, particularly in stark monochrome! I wonder if I will ever be able again to see this site without people ...

@franz: Definitely not during the summer season Franz, although I suspect that if you went during the night hours there would not be too many people around. I had Jokulsarlon just about all to myself during one of the nights.