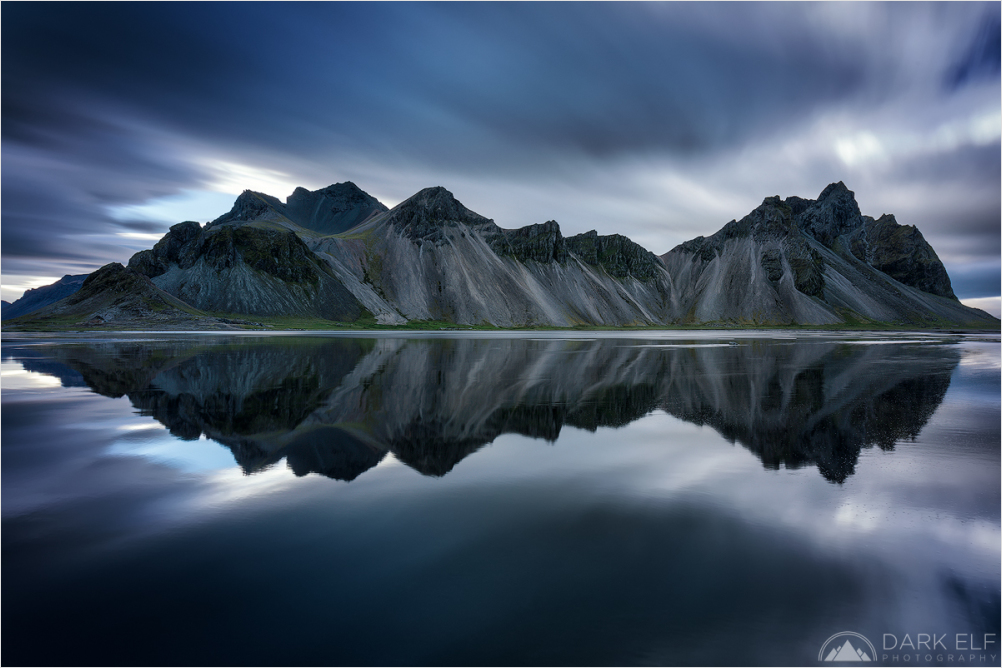 Posted by Darkelf Photography (Perth, Australia) on 23 October 2017 in Landscape & Rural and Portfolio.

A return to the windy evening at Stokksnes in the south of Iceland. I previously presented a photo that concentrated on the eastern end of the Vestrahorn mountain and made greater use of the motion of the clouds reflected in close foreground. Another photo that I wanted to take was a symmetrical reflection of the mountain. I was looking for a right spot and for a break in the wind to get as clear reflection as I could. I never quite got that perfectly still moment but I am very happy with this photo.

The clouds were moving so fast that only a moderate long exposure of sixty seconds was more that sufficient to photography the cloud movement and to smooth the water enough for the duality that I was looking for to appear. Luckily there were not too many distracting elements in this reasonably straight forward composition. There were moments when the water was being sucked out and that left rather unattractive looking foreground. However, as soon as it returned the reflection was back and it often felt just like standing on a mirror.

There were also a couple of moments when the tripod was disturbed by the very soft find black sand that I was standing on. As more water returned, it would start to sink ever so slightly and of course that meant the end of that particular long exposure. I was in no hurry though, because the rain stayed well away and the clouds just kept on coming and coming, so I was able to take more long exposures afterwards.

I thought about converting this photo to black and white and that was my original intention. However, I like the subtle blue tones and the scene already has a monochrome feel to it so for now I stayed with the colour version. I might yet do a black and white one or possibly use another photo from this session for that purpose.

In the meantime, I hope you like the duality of Vestrahorn as it is presented here.

A perfect mirror effect ! I like the subtle tones in this color version but I think that a B&W version could be beautiful also !

@Anna Cherer: Thank you Anna. You might just convince me to do a black and white version one day :-)

@Martine Libouton: Many thanks Martine :-)

Yes, I love the colors so subtle. The reflections are spectacular.

Whether above or below, the harmony is perfect. A beautifully captured reflection!

@Anita B.: Thank you Anita

Wow!! What a stunning capture with glorious light and mirror-like reflections!! The subtle blue tones work well here. I do wonder how the B&W would look as well. :-)

@Steven: Thank you Steven. I might pick another photo from this spot for a black and white version at some stage.

This is a spectacular image. The land looks to be floating in space. The reflections are just magnificent. Even though you described it as being so windy, there is just so much stillness and serenity in this image.

@Elaine Hancock: Many thanks Elaine. Where I was standing it was more of wind gusts rather than constant wind. I had to judge when one gust was about to end and hope that it would be still enough before the next one arrived to take this photo.

I'm not surprised by this Spotlight ! Very well deserved , congratulations !

Back to congratulate you on the Spotlight!!

Congratulations on your spotlight! This is stunning!

Very nice !
Congratulations on your spotlight !

A photo this perfect, this beautiful, deserves the recognition of a Spotlight : congratulations !

I see a craggy man's profile on the right side and once noticed I cannot unsee it :) perfect mirror image

@grouser: Cheers Grouser! I think I can see it as well :-)

Marvelous image, Maciek!! I thought I had commented nut must have gotten interrupted...sorry...
At any rate, Congratulations on your Spotlight award...Most Deserving! This has such an emotional and almost surreal appearance ....The mastery is quintessentially Dark elf!! ;-) <3

@Denny Jump: Thank you so much Dennis! I was really happy that nature found a moment or two to cooperate for me to take this photo ;-)

I like that dark mode here, which still preserves all the wonderful mountainside details and tones. Reflection completes the scene perfectly... Congrats!

Absolutely gripping and one of the worthiest spotlight images ever!

that´s what i would call perfection!

Such a wonderful image. Congratulations.

This photo has been featured in an Aminus3 Photo Challenge: Parallel Worlds

This photo has been featured in an Aminus3 Thread: Essence of Photography: Reflection