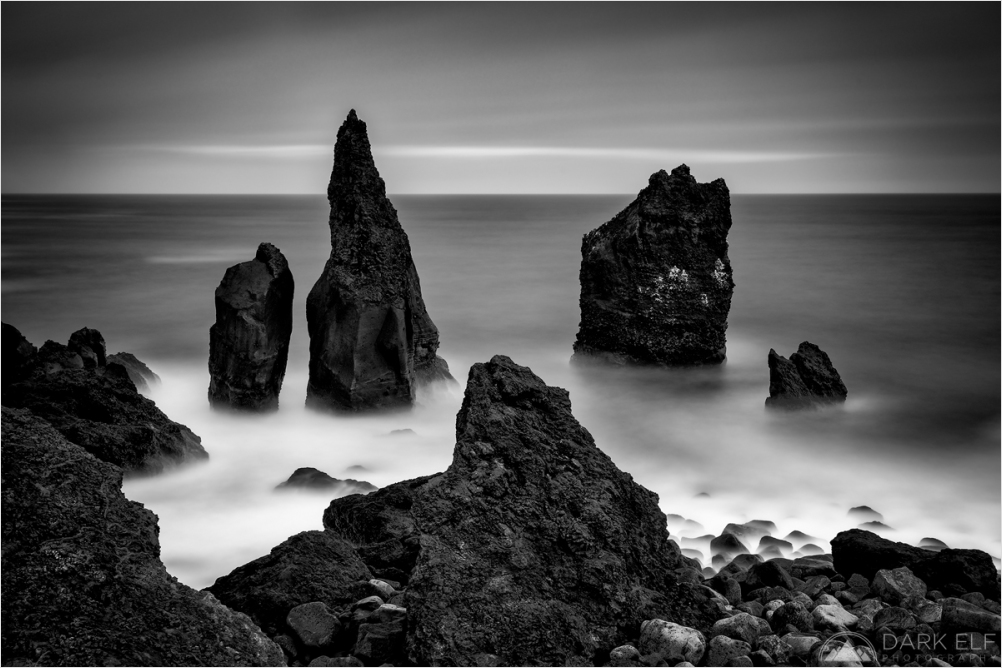 The tip of Reykjanes Peninsula, called Reykjanestá in Icelandic is the most south-western point of Iceland. It abounds in dramatic coastline scenery, dark lava fields and geothermal activity. It was the coastline that attracted us especially to this location. The strange sea stacks near Valahnjúkur hill were the main focal point.

Believe it or not, I completely missed them the previous time we were at this location. We climbed the steep hill, looked in may other directions but for some reason the sea stacks just did not register with me. May be it had something to do with it being the last evening of a very long and intense trip. When I finally learned about them at home, I firmly planted them in my mind to visit in the future. This year we had just enough time to be able to drive out to Reykjanestá and come back with hopefully a reasonable long exposure photo of the stacks.

The weather kind of cooperated. It was certainly overcast but the clouds became just one low grey body of vapour and I struggled to find much texture in them. This was the reason why I chose to stay with a higher vantage point. I wanted to photograph less of the sky and to keep main focus on the foreground rocks and stacks. I also walked around to find a spot from where the stacks would be separated enough by the water to give me a good clean composition. I placed the foreground ledge in such a way so it provides a leading line that the eyes can follow into the scene without encroaching onto the "stone daggers" as I called them.

I took a number of exposures and settled on the four minute one that smoothed out the water between the rocks into a dreamy mist and just gave the clouds enough of texture and movement. The soft overcast light allowed to reveal enough detail in the shadows, although the dark nature of these formations worked well with the mood that I wanted to portray. I think it would be a great location to photograph at sunset and that may be something on my "to do" list when we make it back to Iceland one day.

A gripping rendition of the place, and wonderfully impressive in monochrome. Almost as if from a different planet ....