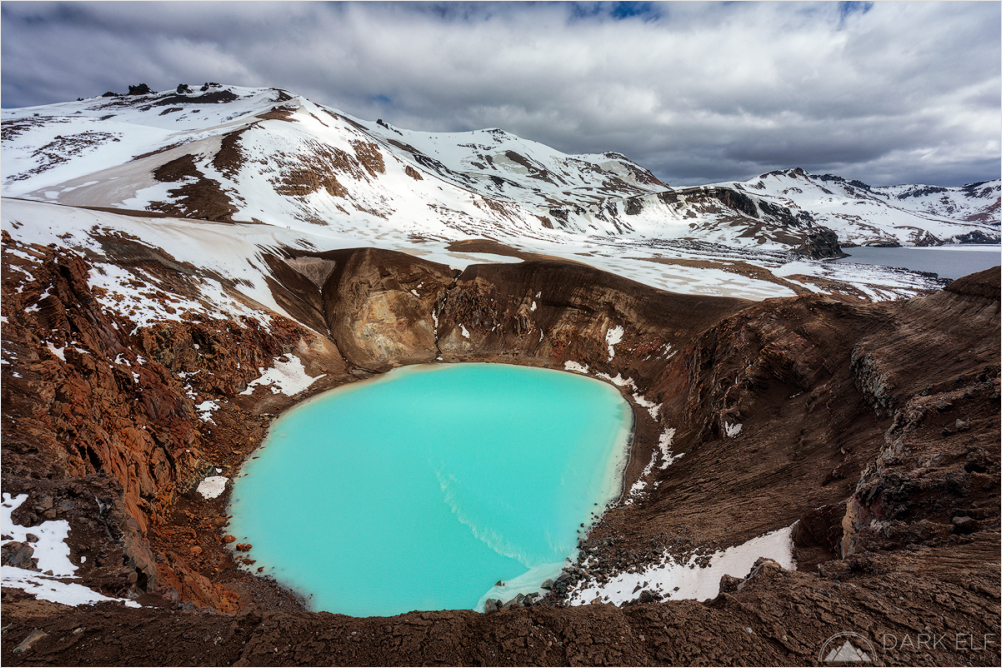 Our main incursion into Icelandic highlands this year was a guided tour to the Askja caldera located in the remote region of Dyngjufjöll mountains. We travelled on a 4x4 bus over some very rugged tracks and forded a number of rivers on the way.

Askja caldera is quite massive and measures around fifty square kilometres. It contains several smaller volcanoes, including Víti, which you can see in the foreground in this photo. Water accumulated in the crater has temperature of around 30°C and you can actually go for a swim in the lake.

When we went there in late June, the roads to Askja have only just been opened after a long Winter season. The added bonus for us was that we got to see some real snow for the first time in ages. We walked about two kilometres from the car park through the snow to get to this place. The snow mixed beautifully with the brown hues of the soil and created wonderful textures and contrast around the caldera. Snow does melt eventually as summer progresses but I was really glad that we got to see Askja still in its Winter guise.

Viti crater stood out with its colourful lake and provided a great foreground element. The walk around the edge of the crater was very muddy and slippery so we had to be extra careful as we walked along. We were lucky that we came prepared with heavy boots. Many other people suffered with only sneakers to carry them through the snow and mud.

If you are ever in Iceland and in the Lake Myvatn region, I definitely recommend either a tour or a drive (if you are brave enough and have a suitable 4x vehicle) to Askja. The terrain you pass along the way is also stunning. The added benefit of going on this tour was that the guide provided a lot of good information along the way about the area an also about Iceland in general.

Superb this contrast. Colors that we do not usually see together

Exquisite blue of the lake in this rugged landscape! So beautiful!!!

This is such a crazy view with that colourful crater lake!

A very beautiful adventure. It was well worth your trek through the snow and mud.

@Steve Rice: Thank you Steve. Hiking through the snow as fantastic. The mud was tough bu luckily we avoided any troubles.

Wow. That is gorgeous.

This is magic Iceland

A spectacular view. The color of the water is incredible. I would be so afraid of slipping and then falling down the the steep side of the crater! I am glad that you took boots! A gorgeous image.