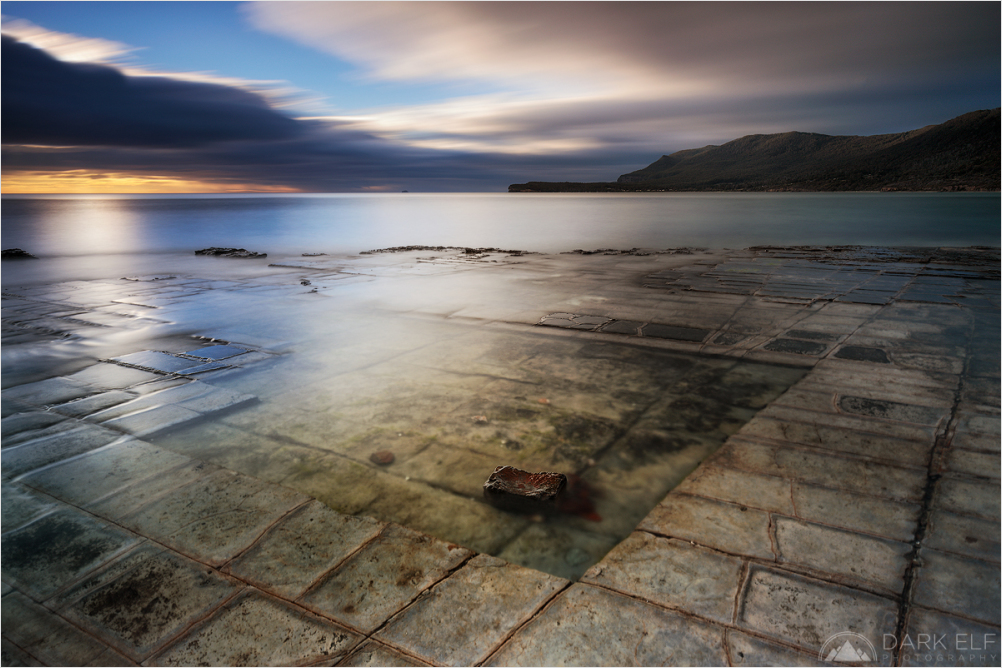 Our first stop in Tasmania was the Eaglehawk Neck and the Tessellated Pavement, which is a well know natural feature and a place that we visited before. I was looking for a bit of sunrise colour in the sky and some reflections in the foreground but that was not meant to be. One morning was completely greyed out and this photo was taken on a second morning when conditions were a little bit better.

I did not get tide right on this occasion as it was just after the high point of the morning, however, the swell was very gentle and I was able to get enough detail out of the "pavement". Long exposure allowed for the wash effect of the waves to be much reduced and the gentle softness that remained worked for me to add a dreamy touch to the scene.

I only went for a two minute exposure, where I usually look for at least three to four minutes. The reason for this was that the light was changing all the time. It was getting brighter with the sun rising behind the clouds and the clouds were moving quite quickly around me. I just was not confident enough of getting a longer exposure right for the scene. This exposure worked perfectly for me with a good balance of light. I do use blending in certain situations but I usually try to get the scene right in one exposure where possible. This still my preferred way in my photography.

This photo is another example of why I love long exposures so much. A standard exposure photo, while still nice, had nothing really happening for me. The detail was very muddled, the clouds did not add much and I would not get the pronounced light and shadow effect across the scene. With the long exposure I was able to inject a lot of mood into the scene right there on the spot. I also love the feeling of timelessness that a long exposure creates with the added bonus of allowing me a long moment of contemplation when the camera is taking the shot.

You are the master of long exposure ! It creates a mysterious and different atmosphere and transforms a common landscape !

Thank you for a great description of your intentions and technique. I enjoy just as much the learning here, as the photographic art views of the Earth's stunning magical places. This picture is empressionist photography.

@Joyce: Many thanks Joyce. I am happy that you enjoy the posts :-)

Beautiful capture with the right shutter speed to reveal what lies beneath!!

This is outstanding - the effect of your sophisticated technique, the hues, the natural phenomenon (of which I had never heard before). Thanks for taking me to all these enchanting places and for teaching me so much about photography! ;-)

@franz: Thank you Franz! Yes, it is an unusual formation but there are few similar ones. In Iceland there is the Kirkjugolf (Church Floor) just of Route 1 near Kirkjubæjarklaustur village. Amazing what nature can produce.

Wow, this is fabulous! Yes, I say that a lot about your work but, it truly is. The pavement is quite an interesting phenomenon.

I know Kirkjugolf, but it's tiny in comparison with this 'Pavement'! Still, I always stop there and show it to the people in my group.

Absolutely beautiful! The rock formation is just amazing. The long exposure created a magnificent image. The color in the sky and the clouds are just magnificent.

This is dream that exists nevertheless, in truth! The scene captivates the imagination so strongly...I just love this one, sir!!

@Denny Jump: Many thanks Dennis! Hope your trip is going well.