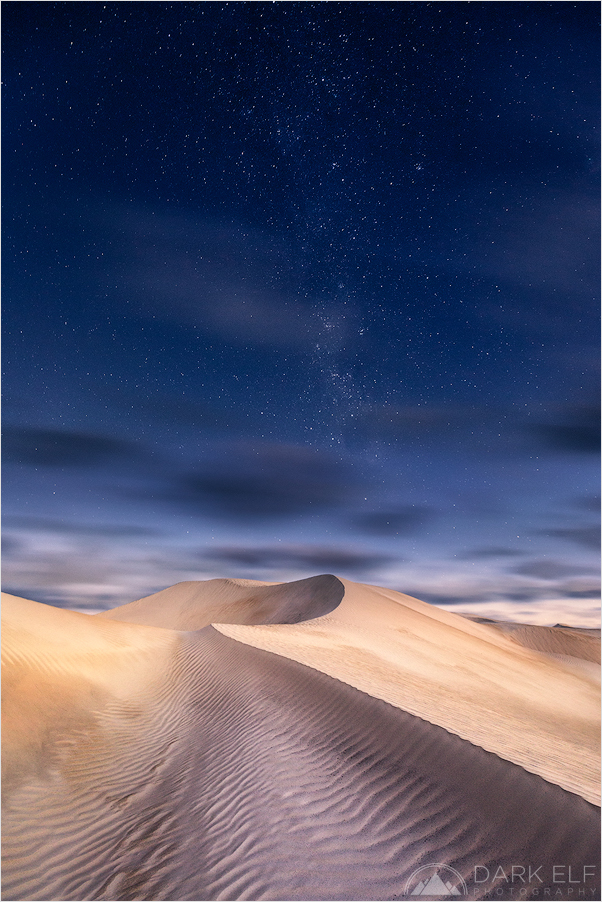 Another photo from the archives that I processed recently. It comes from the sand dunes near town of Cervantes in Western Australia, where we spent an evening shooting the dunes at sunset and dusk.

The exif settings you see here come from the base exposure for the foreground dunes. I took it about 15-20 minutes before it got dark enough to be able to catch some of the stars over the landscape. At home I combined the two exposures together to present this image.

I have not done much work in astro-photography and it is still a relatively new concept to me. This was an evening of experimentation and learning more than anything else. I spent most of the late afternoon hours scouting around for possible compositions. I wanted to find an interesting foreground and also kept checking my smartphone app for milky way and star alignment to ensure that the location I chose would have sufficient stars present for the concept to work.

The sand dunes are by no means remote and they are fairly easily accessible. We were lucky enough though to be there only by ourselves for the evening. Despite a little bit of city glow just over the horizon (even though Perth is situated around 180km to the south) the stars were beautifully clear once the last of the daylight glow started to fade.

In moments like this, as one gazes at the stars away from civilisation, it is hard not to think of our existence on this planet and in the universe at large. At the time I was trying to imagine what celestial forces shaped the life and universe as we know it and standing under the starry sky really emphasised to me how small we are in the grand scheme of things.

An exceptional image with this rain of stars ! And I love the foreground of dunes, the texture of the sand and the atmosphere of this night scene ! Yes, we have to feel quite small here !

@Anna Cherer: Thank you Anna. I am glad you could share my feeling about this scene.

Amazing work with the dunes!

I really admire your work and the way you explain how you captured both the beauty of the sky and the dunes. A stunning photo. *****

@Mireille T.: Many thanks Mireille! I appreciate your interest and support.

Wow, this is not of this world! The differences - dunes by day, starry sky at night - make this look as if it was taken on a different planet entirely. It somehow reminds me of the distant planet in 'Stargate' (the original movie, not the TV-series). All that's missing is the two suns ...
As to your contemplation of man's position in all this, perhaps you would like to watch this!

@Franz: Thank you very much Franz! I was aiming for a bit of that otherworldly feel in this scene. Thanks for the link - it will help to further my future contemplations :-) It made me think of the ending sequence to the first Men In Black movie, where two giant alien creatures end up plying with our universe as though it was a small marble...

What a magical composition with these twinkling stars above the beautiful windswept dunes!! I love the portrait orientation. 5*****

Your words and thoughts are as beautifully composed and presented as this magnificent image, Maciek! I completely agree with your text - I often find myself thinking about who is watching us and what price will we ultimately have to pay for 'trashing" this planet and it's people so badly!! The beauty and peacefulness of your image allows the sensibilities and calm to return to my heart....Thank you for this wonderful piece, sir! Cheers to you and Paulina - I hope she is doing well, by the way ;-)

@Denny Jump: Cheers Dennis! Many thanks for your words. Paulina is doing alright :-) I trust all is well with and Barbara as well!

Such an amazing image, works so well. I’ve been wanting to start doing this sort of photography, just when ever I plan to go out the weather never plays.
You have your exposures bang on. Cracking image

@Alun: Thank you Alun! I have not really done too much of astro either. It requires quite a bit of planning and like you said - right weather conditions as well. This photo here, I just managed to sneak in the exposure for the sky before more and more clouds arrived.

Congratulations on a well deserved Spotlight !

I had to be a spotlight! Congratulations once again!!!

Congratulations on your so well deserved spotlight!

This is just stunning! A gorgeous image. Looking at those billions of stars makes one feel how infinitesimally small we are in the whole scheme of things. Congratulations on the Spotlight! Very well deserved.

Back to congratulate you on the well-deserved Spotlight!!

A wonderful picture that easily warrants the photo award. Congrats!

This couldn't be better. Absolutely a stunner !

A great image indeed, that does deserve the Spotlight. And thanks for explaining where and how it was taken and processed.

This is mind-bogglingly awesome. An absolutely stunning shot.