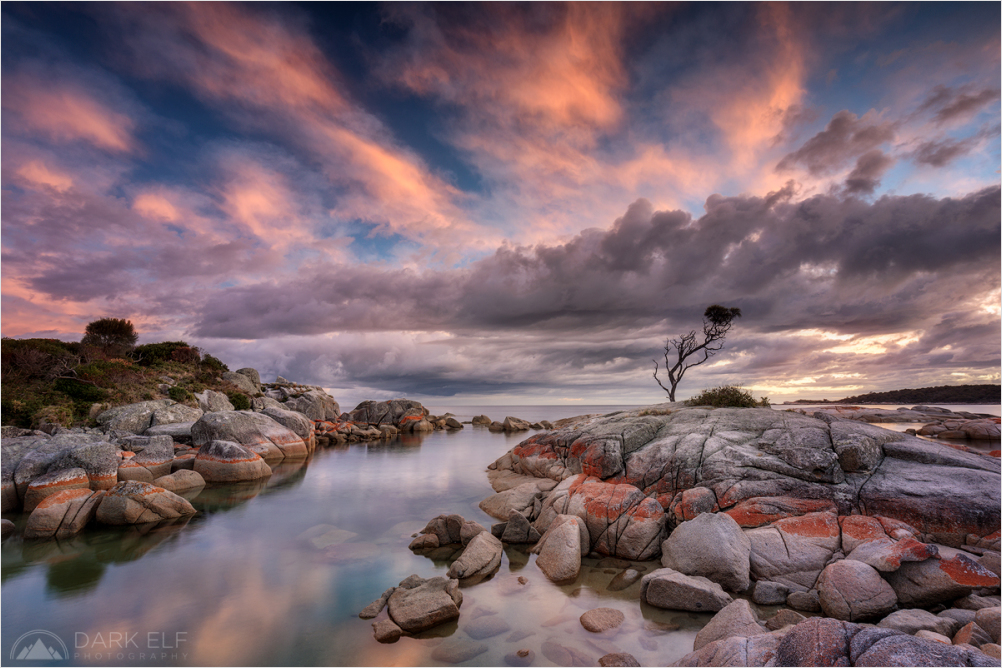 Posted by Darkelf Photography (Perth, Australia) on 27 March 2018 in Landscape & Rural and Portfolio.

Rarely I have experienced such a good run of weather as we did over a couple of days at the Bay of Fires in Tasmania in January. The mornings and evenings were fantastic and provided a wonderful variety of light and conditions that were great for photography and general enjoyment.

While I love the intense light and colours around the golden hours of the day, I also like when there are more unusual clouds and light around. This morning was exactly like that. The band of rainy clouds hovered just over the horizon but it kept low enough to allow some of the higher clouds to be illuminated by the rising sun. The different cloud forms and textures in front of me grabbed my attention at once. I knew that my composition would include more of the sky and I walked around to find a foreground that would work well with that sky.

Once the clouds combined with the rocks in the foreground, I felt that the scene had a fantastic 3d like feel to it. The two layers of clouds emphasise this feeling for me especially. I could almost touch the middle layer just over the tree and I was lucky enough that these rain clouds moved quickly to allow some of that beautiful light to come through at the top and also a little bit in the reflections.

During this trip I concentrated mostly in this little cove, which in itself provided so many different compositions and options for photography. In the future, I would like explore other parts of coastline around the Bay of Fires. There are many other beautiful coves around. It is a fantastic place and it was one of the highlights of our Tasmanian trip.

Wow, absolutely stunning, I love that sky, the layers of cloud. And a great foreground with the rocks

A gorgeous composition with beautiful textures, colors and reflections!! Excellent depth as well.

A gorgeous image. As you say, the clouds are fantastic.

Wonderful image ! I love the rich, and at the same time, soft colors ! your composition with these beautiful rocks in the foreground, the sky with moving clouds, and this little solitary tree which makes a special atmosphere !

Fantastic, from all pov

Stunning! Congratulations on your colour spotlight!

This is a stunning landscape. Nice work.

Congratulations on the Color Spotlight!

This is a stunning image. I love the rocks in the foreground and the reflection of the clouds in the water. The lone tree is just beautiful and I totally love the clouds and the sky. A magnificent image. Congratulations on the Spotlight! Very well deserved!

So Fantastic, sir! There is an amazing sensation that rides along with these clouds as the entire atmosphere adopts a majesty all its own. I Love this one ;-)

: Helen : from is currently at home photographing in, Australia

Wow, time well spent. Of course this was a Spotlight! I enjoy your narratives as well.

This is just spectacular. Your photography has grown so much in the many years you've been posting here.

@Gary Hart: Many thanks Gary. These words mean a lot to me. It is also in part thanks to your informative blog that I still visit frequently.

Wonderful landscape with the residual vegetation.

A wonderful landscape scene! An hour could be spent exploring this :)