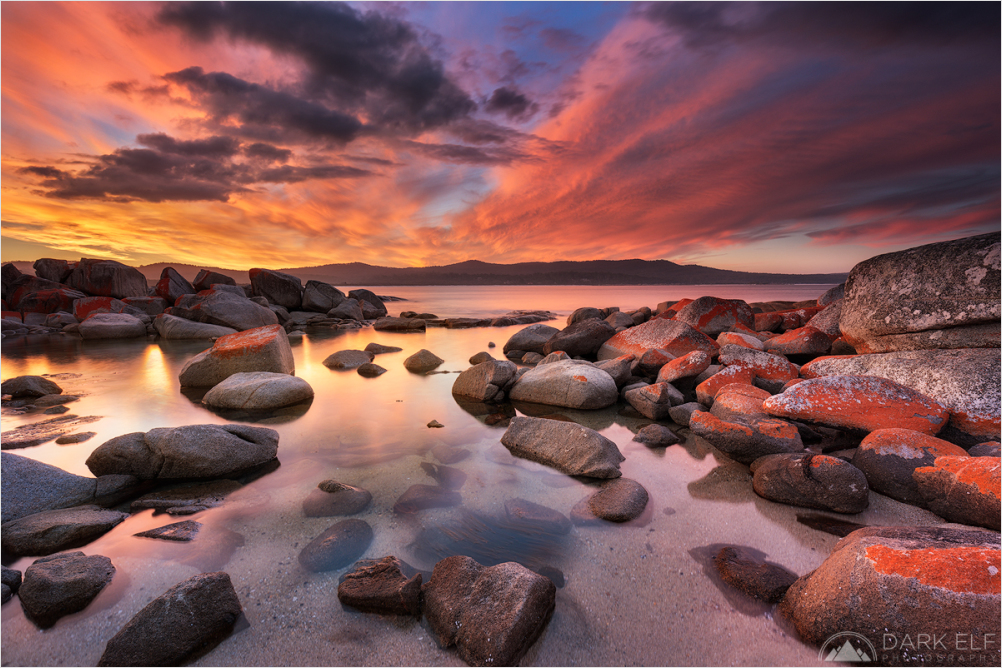 Back to the intense sunset that we experienced at the Bay of Fires in Tasmania in early January. It is situated a lot further south than Perth and I really enjoyed the long lasting light and colours. Where I live, sunset usually does not last longer than 15 to 20 minutes. This one went on for longer than half an hour, which allowed me to look for alternative compositions and slightly different angles of the scene that I was photographing.

Besides the colours in the sky and their reflections, I was also looking for the red rocks that are associated so much with this region. I wanted to include them in my composition and sometimes it was tricky to find the right spot for it all to come together. However, I find that once I settle on the original spot and set up my camera ready to take the shots, that gives me time to be able to look around for other possibilities. Another advantage of the long sunset was that I was able to hop around the rocks to find these alternative compositions without worrying that the light was going to fade out quickly.

What I especially like in this composition is the tonal symmetry. On one side, I had the fiery golden tones in the sky and their reflection in the water and on the other, the red clouds and corresponding rocks below acting almost as a another reflection of the sky. For this photo I actually got right down to the water level, which also brought a slightly different perspective to the landscape. The rocks rising just over the horizon gave me a bit of a challenge in terms of positioning my graduated filter and I had to use a second exposure for the brightest part of the sky, as there was just no way to have all the details across the entire scene from a single frame.

I used a longish shutter speed of eight seconds, which results in lovely smooth water surface and also in the clouds appearing a bit more wispy and liquid like. I was happy to sacrifice a little bit of texture and detail in the sky to get the dreamy mood that I was after.

It is funny how some sunsets seem to last forever and others are over so quickly. The mistake that I have made many times is to think that it is all over after the sun dips down below the horizon. I start to pack up my things when the beautiful color has just begun. This is just gorgeous. I love how the water reflects the color in the sky. The red rocks look like they are on fire. 5*

@Elaine Hancock: Thanks you so much Elaine!

This has a magnificent blend of colors and visions, Maciek! This is really a peaceful scene as well....Beautiful, sir!

Colors in the sky and on the rocks play perfectly together here.