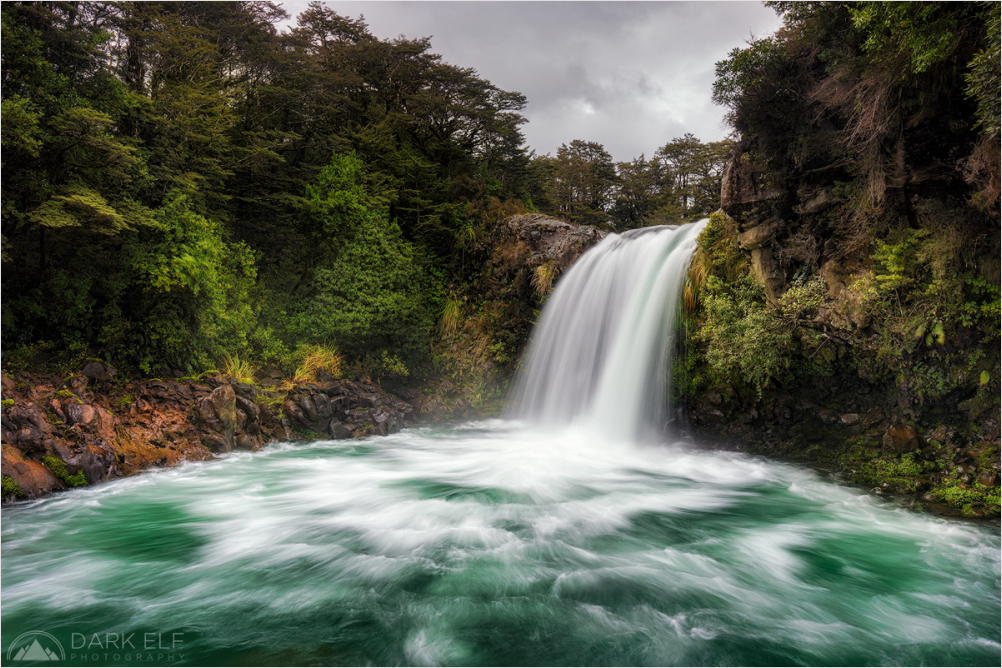 I am staying with the green colour theme for another photo, though this one not quite as lush as the previous. I took it on a gloomy day at Tongariro National Park in New Zealand two years ago. The waterfall is called Tawhai Falls and it is located not too far off the road leading into the national park.

Despite the cloudy and almost rainy conditions, there was enough colour showing through in the foliage and also in the water pool below the falls for me to let go of the preconceived monochrome impression and to work on a colour version of this image. I also have a very long exposure version that I might process one day. However, what attracted me to this one a bit more was the wonderful texture of the wavy flow in the foreground. The water flow was very good after recent rains and that resulted in the water thundering down into the pool with quite some force, which created great mini waves. It almost felt like being at the seashore with the waves pounding the coast.

I found a secluded spot, perched on a couple of rocks overlooking the waterfall and the pool that allowed me unrestricted view and time to take this photograph. I was lucky that the wind was not blowing continuously and there were only a couple of branches that moved as I was taking this shot. Spray from the falls, as always in similar surroundings and conditions, was something that I had to watch out for and it was a game of patience to time the shutter button between wind gusts. A number of times I thought I nailed it, only to find water drops clearly visible in the resulting image. In my beginner days I would not check the image thoroughly until we returned to our accommodation. These days I study images in greater detail on the back screen before being satisfied that I did everything possible to get the shot I wanted.

I used a polarising filter to cut through the glare and emphasise the leaves and green tones of the water. I also used a graduated ND filter for the top part of the frame to ensure that the clouds were not blown out. I wanted at least a little bit of texture in the open space above the fall. In addition, the graduated filter helped me to control the darkness of the clouds to add a bit of extra mood to the scene.

A superb result! The overcast day was no problem at all given your patience and careful work.

A great capture of this waterfall!! I love how the water radiates outward here.

Brilliant image! It feels as if the water were rushing directly towards me ...
Also, the range of greens is magnificent, as is the result of your long exposure!

This is just beautiful. The long exposure really accentuates the beauty of the falls going over the water and as it spreads out in all directions and moves forward. The color is just stunning. 5*

an excellent exposure yo convey the motion in the water