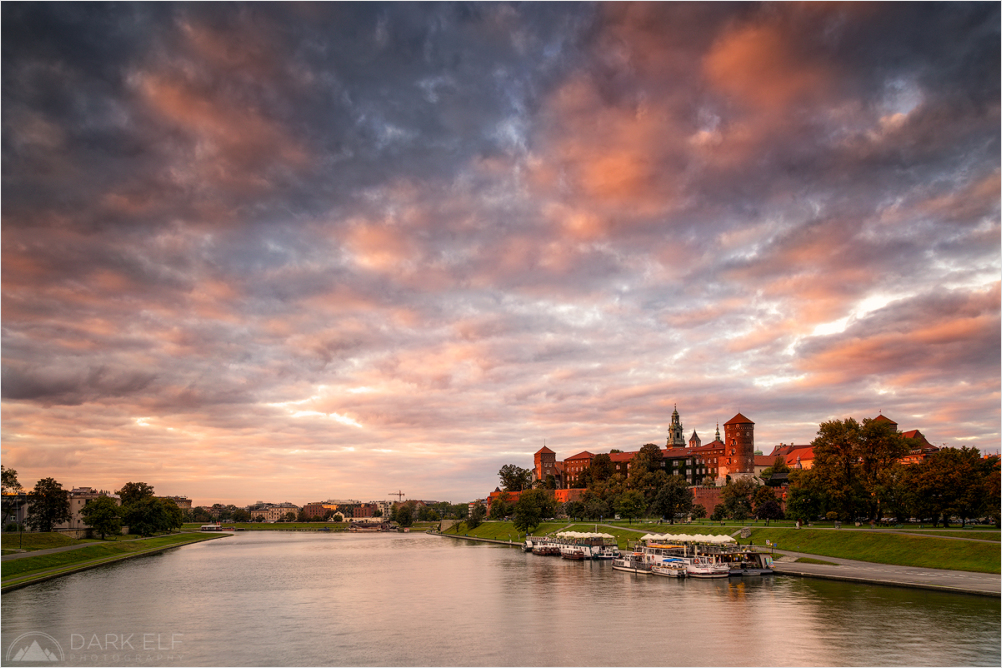 Dusk of The Kings

A change of scenery today. I have not been taking too many urban/city images in recent times, so I decided to look through the archives for any photos that I might have forgotten. I found this one from 2015 from Krakow in Poland.

We had a few attempts at photographing a sunset over Vistula River and Wawel Castle but most of them did not produce the conditions we were hoping for. This one was the closest we got a a colourful evening. I quite liked its subtlety and the way that the sky looked with just touches of colour under the clouds. I also liked the last rays of the setting sun illuminating the castle and enhancing the warm tones, which made the structure stand out more.

I considered a closer, tighter frame around the castle itself but then I would lose the colour in the higher clouds overhead. In the end, I chose to go with a wider composition, including the river and the opposite bank in the scene and letting much of the sky and colours fill the frame.

A beautiful composition ! superb colors of sky and lighting on the castle ! Like a romantic painting !

What a beautiful sky, colors and view

a lovely contrast between sky and river

Yes, a lovely sky and wonderful warm light on the red castle. A remarkable image.

As always, I enjoy your sharing of the creative process that went into the photo ... and I always like the result! Here, what appeals most to me is the perfectly balanced compo and the remarkable sky.
Krakow is only 400 km from where I live, but I'm ashamed to confess I've never been there, though I contemplated going several times. Perhaps if you post more images of this famous city I'll finally get going ... ;-)

@Franz: Many thanks Franz, as always! You should really make the trip. I think you would love it and there are many photographic opportunities there as well. If you ever go, make sure to visit the salt mine in Wieliczka and, despite its very depressing nature, Auschwitz.

This is Such a wonderful composition, Maciek! I absolutely love this one ;-) It also made me reflect upon the few trips I made for business to Bogatynia, Poland when my company was involved in the construction of a power plant there....I traveled there a couple of times and was always upset that I could not get out and see more of this beautiful country - Poland!! I Just loved it...So thank you for your wonderful images that carry me back to that amazing and fascinating country, at least in y memory and imagination! ;-)

@Denny Jump: Thank you Dennis. I am very glad that my photos stir these emotions in you!

Me again! Auschwitz is definitely a place I'd visit, even though it must be disturbing and depressing (as are Terezin and Mauthausen, places I have already been to). I've never heard of the salt mine - thanks for the hint!

I love the expansive sky in this beautiful landscape

This is just beautiful. It looks like an oil painting from one of the great masters. The colors are just stunning. A gorgeous composition!

Krakow is still on my travel list :) Beautiful sky.